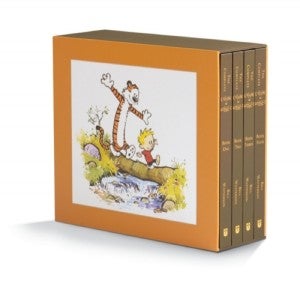 This November, The Complete Calvin & Hobbes, the oversized anthology volume previously published only in a hardcover edition for $150, will become available in a paperback edition for $100, The Daily Cartoonist reports. Whereas the hardcover version was composed of three volumes--which together contained all of the strips published by Bill Watterson during his ten-year run creating arguably the most beloved comic strip since Peanuts--the paperback will be changed to a four-volume collection, presumably to keep the binding from being overworked. Both editions come in a slipcase that allows the buyer to keep them together on the shelf, featuring art by Watterson on the outside of the case. The hardcover edition was a New York Times bestseller and one of the biggest revenue generators for Andrews McMeel, the parent company and publishing company behind Universal Uclick, who maintain Watterson's comic archives online. Selling more than half a million copies at a cover price of $150 will do that for you. The hardcover is not yet out of print and is currently available at Amazon and Barnes & Noble for below cover price (it routinely goes on sale at Barnes & Noble for half off), but will likely go out of print when the softcover hits, which will either drive the price up or depress it as it hits B&N bargain tables around the country. We'll see which way that goes in November.

Calvin & Hobbes Omnibus To Be Made Available in Paperback

WWE Airs Mysterious New Vignette During Money in the Bank 2022