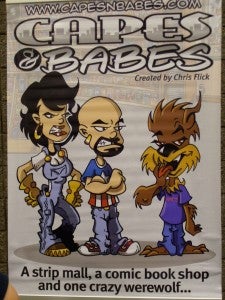 "It's about a strip mall, a comic book shop, and one crazy werewolf." This was the premise of the web comic series Capes N' Babes, drawn and written by Chris Flick, who went on to tell me that he was inspired by what he saw around him in his everyday life, "It came from all the time I spent in comic book shops I spent as a teenager. The characters have been in my mind for awhile now, and once I decided that it would take place in a comic book shop, the rest just came to life." The characters he refers to occupy that shared space in that little strip mall. There's Marc, the manager of the comic book store called Capes N' Babes, who happens to have a video podcast set up in the back of the shop where he interviews celebrities, superheroes and others of note! The crazy werewolf mentioned by Flick is named Roy, who works at the video store down from Marc's place. Described as harmless, he is an aspiring comic book artist himself. While these characters may have been around for awhile now in Flick's mind, his website, capesnbabes.com, is still in its early stages. "We went online in November of 2007, so we're coming up on almost two years now. As a web designer by trade, setting everything up wasn't too difficult," Flick said. The illustration piece of this operation was not laborious either. Art and design have always been in his blood, starting early in life and then becoming a major starting at the Maryland College of Art and Design and concluding with his graduation from Radford University. Perhaps the biggest hurdle to his getting started online with Capes N' Babes was just taking the first step, but Flick offers sound advice for others who may be hesitating to make that leap, "Do it. That's the best thing I can say; don't wait until you think you're going to get better because you will always get better. You have to draw every day to make improvement." Flick's will and determination has helped to spread word of his website. He's done several comic book conventions by this point, most recently Charlotte, North Carolina's Heroes Con. "Every con I've gone to has resulted in a spike in activity for the website, which is what any web creator wants," he said. The future is bright for Flick and his cast of characters as he continues to build an audience and to expand his network of readers. His love of the series has expanded the well of ideas he has to draw from, with him adding that the more he focuses on the series, the more he finds to write about it and its universe. "Sometimes I have more ideas than I can draw," he said, "and when people come to see me at conventions, it makes me feel great that they're enjoying my ideas and seeking me out to tell me how much they like something I've tried out or done with a character." Flick has recently finished publishing a collection of his work, over 200 strips of Capes N' Babes along with additional content, and he welcomes fan feedback on his work, "I love to get comments on my blog, either critical and helpful or telling me that they liked something. It's good to get that engagement with the readers." The ever expanding success of Capes N' Babes is a testament to Flick's work and devotion over the past couple of years, and it's safe to say that we'll be seeing more adventures from that strip mall, comic book store, and of course, the werewolf, in the future!

Capes N Babes and a Lot of Imagination! My Interview with Chris Flick