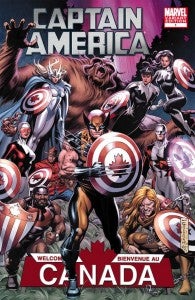 The Fan Expo Canada 2011 takes place at the Metro Toronto Convention Center. The Captain America #1 Canadian variant will be available for purchase for only four days (August 25th-28th) at the Fan Expo Canada Exclusives Booth.

Captain America #1 is written by Ed Brubaker with interior art by Steve McNiven. The variant cover by Dale Eaglesham shows a number of Canadian superheroes like Wolverine and the members of Alpha Flight holding shields with the maple leaf that appears on the Canadian flag.