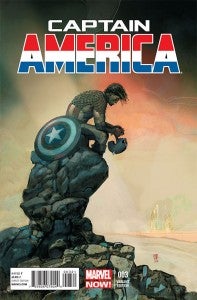 #3, out in stores today from writer Rick Remender and artist John Romita, Jr., features a twist that would have overtaken the conversation surrounding the issue no matter what--but in the context of Marvel's recent moves on the Spider-Man family of titles, it's generating even more interest--not all of it positive.

Over in Superior Spider-Man, as most people know by now, Peter Parker has "died" and been replaced by Dr. Otto Octavius, a new, more aggressive Spider-Man with a blue Jedi ghost of Peter Parker following him around as a Jiminy Cricket--wow, that's two Disney references in one Spider-sentence.

Well, this week's Captain America features Steve Rogers realizing (as you can see below) that he's been "infested" by Arnim Zola, one of his most persistent nemeses. How did that happen? What's Zola's endgame? And what's the difference between Zola possessing our hero and Spider-Man's villain literally taking his body over? The writer had some words on the matter. 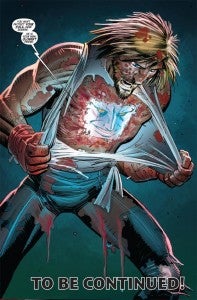 "It's a consciousness infection. That was the thing that Zola was plugging into Steve in issue #1, you see him take that giant needle and shove it into his chest — and this is what it was," Remender explained in an interview with Newsarama. "It's a consciousness infection, because Zola wanted to take over Steve, and use him to go back to Earth and do dastardly villainous business. But then Steve escaped...  It obviously seems significant — with a supervillain implanted onto Captain America's chest and all. I wanted to make an impossible situation for Steve, one that he has no earthly reason to be able to survive and get out of. This is another stage in setting him down that road. Not only is he dealing with being stranded in this foreign environment, with the health and care of a child on his shoulders, he's now looking down the barrel at a Zola infection that will be trying to take over his mind. It serves a very different purpose than what Dan's doing in Spider-Man. Because of the differences in the execution, and the differences in what it ends up doing to Steve, and it didn't seem like a concern. It's very different."

Is it different enough to sell you on it--or is it just another case (like The Return of Bruce Wayne and Captain America Reborn) of two similar stories hitting at the same time?