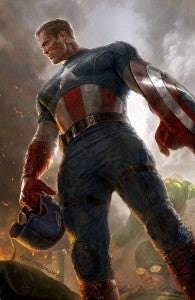 Suddenly, rather than being part of a family with descendants in the States going back almost to the Mayflower (we've seen a number of them over the years in backup stories and the like), Steve Rogers is either a first-generation immigrant or at least the son of them. It's impossible to tell from the framing device used in the first issue whether Rogers was actually born in the U.S.A. or if he came here with his alcoholic, abusive father and his assertive, strong-willed mother. Arguably, it makes no difference to his character, as the core of Captain America lies no in his nation of birth but in his love of and faith in the country her serves.

Still, the dual oddities of retconning the most wholly American of all comic book characters into an immigrant while promising a relaunch that wouldn't change continuity and isn't a reboot (because after all, DC is just TURRIBLE for doing that to their fans, amirite?) stick out a bit, don't they?

And of course there's the reality -- that whether or not he's a first-generation immigrant makes no narrative difference to Steve Rogers, who he is or what he stands for -- and then there's the perception, which is that something like this will make him less "American," or at least less representative of the middle-class white guys who read comics.

The audience in comics is not only protective of issues like this (exhibit A being the way they pounced on the absence of "The American Way" in Superman's mission statement back in the 2005 movie) but also resistant to change, meaning this is a potential sticking point.

Captain America: Just a Kid From Brooklyn From Ireland