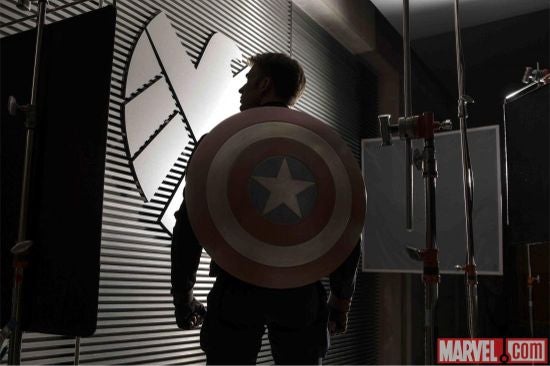 The scene fades to black and then reopens with a city shot of Washington, D.C. Captain America’s voice can be heard saying, “I joined S.H.I.E.L.D. to protect people.” Captain America is sitting in an office with Agent Alexander Pierce (who is played by Robert Redford). Agent Pierce says, “Captain, to build a better world, sometimes means tearing the old one down, and that makes enemies.”

There is a brief flash of Steve Rogers (in street clothes rather than his Captain America costume) and Black Widow (as played by Scarlett Johansson) walking in a dark room. Then, there is a close-up of the S.H.I.E.L.D. logo. A voiceover says, “Are you ready for the world to see you as you really are? See what’s out the window. You know how the game works. Disorder. War. All it takes is one step.” There is a montage of scenes showing Agent Nick Fury (as played by Samuel Jackson) entering a room, Black Widow turning, Captain America looking out the window, Agent Pierce and Agent Fury shaking hands, Captain America crashing through a glass window, a closeup of Sam Wilson (aka The Falcon played by Anthony Mackie), an operating room, Steve Rogers in street clothes, and various aircraft taking off.

Agent Nick Fury is standing beside Captain America. Agent Fury says, “We’re going to neutralize a lot of threats before they even happen.” The scene flashes to a helicarrier taking off. A Captain America voiceover says, “I thought the punishment usually came after the crime.” Nick Fury responds, “S.H.I.E.L.D. takes the world as it is, not as we’d like it to be.” Captain America says, “This isn’t freedom. This is fear.” Nick Fury says, “You need to keep both eyes open.”

The scene flashes to Captain America getting ready to jump out of the cargo door of a plane. Captain America is knocking someone over with his shield. Captain America is running and leaping into the air. There is a shot of a police barricade and then a car exploding and flipping over. There is an action sequence of Black Widow fighting someone, several explosions, and then Steve Rogers (in street clothes) standing in front of a gravestone. Sam Wilson is on the roof with a rifle. A bus flips over and someone crashes in through the front windshield. There are random shots of people standing, jumping, and shooting.

Sam Wilson is on a roof as a helicopter opens fire on him. Wilson falls off the building backwards with his guns blazing. There are more close-ups of Agent Pierce and various action sequences. Captain America is riding his bike toward a jet. A helicarrier is on fire and falling out of the sky, crashing into the ground. Captain America’s battered and burned shield is sticking out of the ground as someone’s legs can be seen approaching. A metal hand reaches down to grab the shield. The camera pans up to reveal the Winter Soldier.