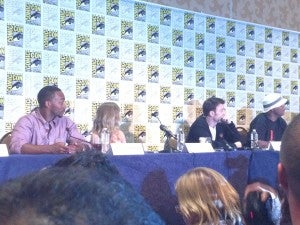 UPDATED: Watch the video below!

Tonight, following their appearance on stage at the Marvel Studios panel, the cast and directors of Captain America: The Winter Soldier appeared before a small room of media.

ComicBook.com was there, and here's what we heard. There was a bit more than this going on, and we'll break some of it out into stand-alone stories in the morning, but for tonight, here's an overview of the discussions. 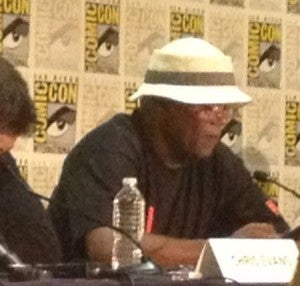 Samuel L. Jackson: That's on the talking point list of things we can't tell you.

Question: How do you enjoy working together as these characters?

Scarlett Johansson: Well, when we find these two characters we've really been working together...it's in real time, so it's been about two years and we're both agents of S.H.I.E.L.D. Chris pointed out earlier, which I hadn't thought about, we're fighting on the ground. It's not like we have these super powers that we use and so we have a similar kind of shorthand between us. We fight a similar style and it's very much a working relationship.

They come to find themselves in a position where their working relationship is more of an intimate friendship. I think these two people have some unexpected similarities in between them. They both have trust issues and they've also both been working for The Man for their entire career. So through this kind of unexpected friendship that forms, they're starting to question what they want and starting to kind of question their own identity.

Question: Captain America is really the only remaining kind of wholesome, apple-pie, all-American superhero anymore. We just saw Man of Steel, in which Superman was more angst-ridden and violent. 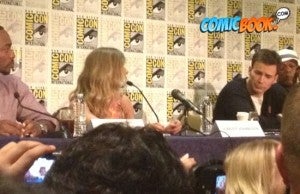 Chris Evans: To be candid, that's kind of the hurdle with Captain America is that his nature is to put himself last; his nature is to take everyone else's conflict and put it on his back and as a result it makes it difficult to find an interesting film because most complex characters have flaws and Cap's--he's a boy scout. I think what's good about this movie is that the first Captain America movie was about giving him the opportunity to serve, the opportunity to be a soldier and Avengers you've got all those other characters and all those establishments of relationships so you can't really dive too deeply into any individual character.

In this movie, it's about showing Cap--now, given the opportunity to serve, given the ability to give of himself, the question now becomes what's right. I think he's so determined to be good, to do what's right, the conflict of this modern society is, what is right? I think in the Forties, it was pretty easy to say Nazis are bad. We can all agree on that. Today, it's a little bit harder to know where you come down and who you're serving. And with modern technology and the access--and this is pretty relevant today for all of us.

Where's the line? What are we willing to compromise in terms of civil liberties to ensure security? And I think that's where it gets blurry for Cap. What's the right thin to do? And I think that makes an interesting conflict for him because it's not about just doing the right thing--it's what is the right thing? I think we get to watch Cap struggle a little bit, because it's not black and white; it's gray. I think that's the way his relationship with Black Widow comes to fruition. The relationship with Black Widow is interesting because she's someone who's always had the ability to compromise her morals and Cap is so black and white. I think as a result...I can't say too much but something happens.

Question: In the first movie, the only reference you got was the flying monkeys. Will Cap be a bit more caught up by the time this movie comes around?

Evans: Sure, sure. I think you'd get a little tired if every joke was, "What's the Internet? Blah!" He gets it, he gets it, he gets it. That's the problem is he doesn't sling jokes; he's not sarcastic so it's hard to find the humor unless the humor is self-depreciating but you can't keep playing that one note of "I don't get it! What's going on in this modern world?"

He's up to speed, he knows how things work, he has a cell phone so we're not just hitting that one note; we're trying to find humor other places.

Question: Can you tell us any difficulties you had suiting up for a third time?

Evans: Difficulties? I have difficulties trying to meet the bar which Marvel has set. You have all these fantastic movies with fantastic people. Every time Marvel makes a movie it's better than the last one and you just want to make sure you're not the weak link in the chain, I suppose. You have all these very talented people coming together and you just want to make sure you do your mark.

Question: How much Falcon is in the film, and is it possible to get more Falcon?