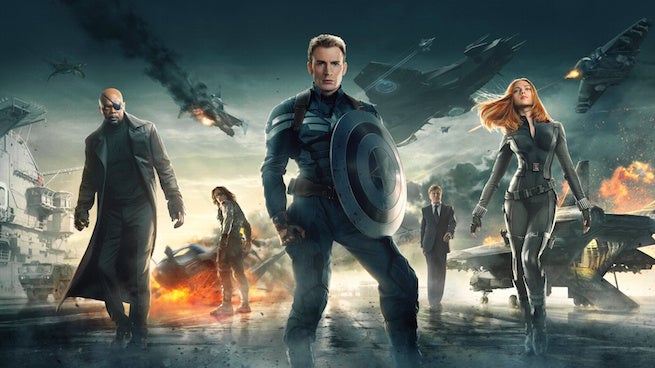 Captain America: The Winter Soldier may be one of the best-reviewed comic book movies ever made, but that doesn't mean it's free of continuity gaffes, minor factual errors and the kind of "reverse Easter eggs" that are fun to spot and have a laugh with.

In fact, according to MovieMistakes.com, The Winter Soldier is the most mistake-ridden movie of 2014 (assuming something doesn't overtake it in the next two weeks).

The site says that the newest Captain America movie features 53 mistakes - one every two and a half minutes.

"Spotting things like this can be great fun, but they don't affect my opinion overall," said Jon Sandys, who runs the site. "Some of the greatest films of all time have some complete howlers in them, but you don't notice them at first because you're enjoying the movie so much!"

Fans voted on the top gaffes of the year and Captain America: The Winter Soldier also topped that list. Here's a sampling of the top five:

Captain America: The Winter Soldier:
The location in DC has latitude and longitude shown onscreen, both using north/south - longitude is an east/west factor.

The Hunger Games: Mockingjay - Part 1:
After shooting down the fighter, Katniss' arrow count in the following scene is correct, missing one red tipped explosive arrow. In the next scene, however, the missing arrow has returned.

Transformers: Age of Extinction:
In the last fighting scene Cade is running from being shot by Lockdown after Optimus Prime is impaled. He is hiding behind a ruined wall and we can see a crew member hiding behind the wall with him. He disappears in the next shot.

Interstellar:
In the docking scene where Coop is trying to dock the service module to the partly damaged Endurance, the Endurance is spinning around its center axis. As the ship was damaged around the perimeter it would spin around its new center of mass, that would be off axis. The docking bay itself would revolve around this new axis, making alignment much harder.

Gone Girl:
Fairly early in the movie, Margo comes to see Nick, who is upstairs in a bedroom. The press is outside clamoring, and Margo locks the deadbolt on the front door. After her talk with Nick, she's in a hurry, rushes downstairs and opens the door...without unlocking the deadbolt.

You can see the full list and more details at the official site.