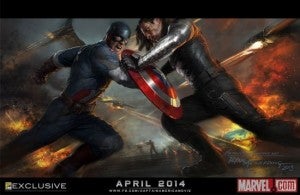 The first theatrical trailer for Captain America: The Winter Soldier will screen ahead of prints of Thor: The Dark World starting in November, Disney reps revealed at Cinema Expo in St. Petersburg.

That's the word from Kinopoisk (via CBM), who also claim quite a bit of new footage and information was released at the show from Thor and Captain America to Need for Speed and Guardians of the Galaxy.

According to CBM's translation, there was even footage screened with Groot, where Vin Diesel spoke (presumably saying "I am Groot!").

Cinema Expo wasn't the first place to see footage from the upcoming Captain America sequel, directed by Community and Arrested Development veterans Joe and Anthony Russo, but fans who haven't been to D23 or San Diego Comic Con International still haven't glimpsed any footage from the film yet, so barring any official releases in September or October, November's trailer will be the first impression for many.

Captain America: The Winter Soldier Trailer to Debut With Thor: The Dark World