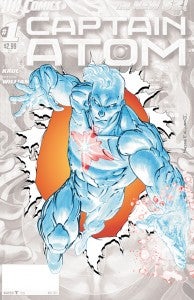 With four new titles rolling out during DC's Zero Month event in September and only Justice League International slated for the chopping block as far as anyone can tell, the comics industry has been waiting for the September solicitations to roll out today and reveal which DC books would come to an end with September's "zero issues" in order to keep DC's "New 52" publishing line at 52, and now we've got our first answer. J.T. Krul and Freddie Williams II's Captain Atom, one of DC's lowest-selling titles since the relaunch but consistently heaped with praise from editorial, will see the character's origin retold in #0, and then the series will end on that note, according to new solicitation information at DC's blog, The Source. Watchmen's Doctor Manhattan, whose character is derivative of Captain Atom's, will begin appearing in his own miniseries soon from DC. Moore's version of the character had proven so much more popular than anything else DC has tried with Captain Atom over the years that many fans pointed out that Captain Atom seems much more Dr. Manhattan-like in Krul's iteration of the book. At least one critic said that the title was "as close as fans will ever get to a Dr. Manhattan ongoing," so it's interesting that the title will end at a time when, for the first time in more than 25 years, Dr. Manhattan is back in print. There's a theme running through Captain Atom of death and rebirth, a cycle of life that had led some to suggest that ending the series on a prequel like the zero issues actually made a lot of sense--and it appears that, on a meta-textual level, that cycle continues.' Captain Atom is the only title in the Justice League family solicited as "final issue," with no such text to be found in the Batman family solicitations. Expect more information on cancellations and creative changes as additional solicitation information comes in throughout the day.