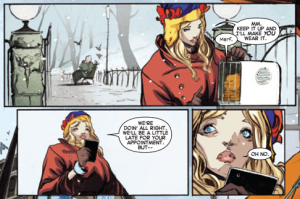 The preposterous hat that Carol Danvers, better known to readers as Captain Marvel, wore in a recent issue of the series has been turned into an actual knitting pattern, made downloadable by series writer Kelly Sue DeConnick, and duplicated by a fan, all in less than a week.

And it is awesome.

The hat, which appeared in yesterday's Captain Marvel #9, follows the color scheme of Carol's superhero costume but is not in any way identifiable as Captain Marvel merch, except for having appeared briefly in the comic.

Here's DeConnick, from her Tumblr:

So here it is, Carol Corps!  The present I promised:

That right there is Carol Danvers’ lucky hat, as knit for her by Grandma Rose in Captain Marvel Issue 9, which I know you are all going to have in your hot little hands come Wednesday the 16th.

Here is the panel description for the hat’s first appearance:

Carol walking toward camera about to turn a corner, Grandma Rose eating on the park bench behind her.  Carol is now wearing a ridiculous knit hat.  Something really bright and absurd, maybe with knit flowers all over it like one of those crazy old fashioned bathing caps.

If such a thing is possible, the cat is smiling.

What I got you is the knitting pattern.  I commissioned my friend, the annoyingly talented and resourceful knitwear designer Nikol Lohr, to produce a pattern based on Filipe Andrade’s drawing and Jordie Bellaire’s colors.  I paid her in real money for the right to give you this pattern for free, so that, if you choose, you may produce one of these beauties for yourself (or, cajole one of your knitting friends to do it for you).

I corrected the pattern to add the gauge, but not before I uploaded. If you have the wrong link, gauge:

Gauge is taken with fabric soaked then dried flat. 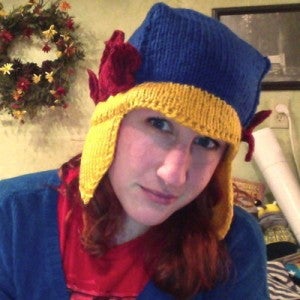 And here's "Carol Corps" member Beth Raebel, in the one she made for herself.

We often bring fan-made art or video to the attention of our readers, and this is like that in a couple of ways--it's fun, awesome and this writer has approximately five percent of the skill necessary to make such a thing myself. Otherwise, I totally would.

Side note - since #9 was the first issue branded with Marvel NOW!, does this hat count as a Marvel NOW! costume redesign?