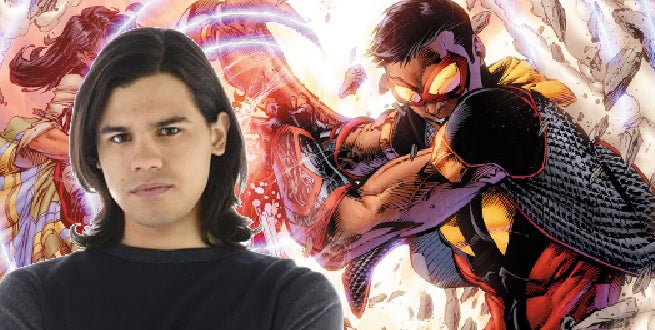 It’s almost hard to believe The Flash is only just wrapping its first season. Perhaps that’s because the character of Barry Allen premiered on season 2 of Arrow, or maybe it’s that a third show, DC’s Legends of Tomorrow is already on the docket. Maybe it’s just that the first season has had so many wild twists and turns, including the big one: mentor Harrison Wells actually being supervillain Eobard Thawne.

As it turns out, another reason it’s hard to believe this show has only had a single season – the stellar supporting cast at S.T.A.R. Labs, including everyone’s favorite villain-naming tech genius Cisco Ramon, knew about that twist all along. At the CW Upfronts in New York Thursday, ComicBook.com chatted with actor Carlos Valdes about his fan-favorite character, some of those twists and turns, and how he likes feeling the vibes as Cisco (no, not those ones, though yes, that too).

Carlos, did you know just how far Cisco would come in season one? I feel like on a personal level, he had a lot of character development and growth.

Carlos Valdes: Yeah, absolutely. You know, with this show, we don’t know specifically what events are going to shape these characters into their ultimate trajectories, their end games so-to-speak, but we do know the sign posts. Do you know what I mean? We do know the big markers for the plot.

Like, we knew that Harrison Wells was really Eobard Thawne, the Reverse-Flash…

Wait, you knew that from the very beginning?

CV: (laughs) Exactly! So yeah, we know the major markers, but we don’t know the details about how we get there.

Both Grant and Candice, when I asked them what character they most want to interact with more in season two, they both said Cisco!

So who does Cisco want to interact more with in season two?

CV: Umm, you know, honestly, I love the scenes where Cisco and Joe West get to play around. I love playing off of Jesse L. Martin; he’s the best. I don’t often get scenes with him; I do every now and then, and when we do, we get along like gangbusters. I think there’s a really nice dynamic there between Joe West and Cisco. I’d love to work with Jesse a bit more.

It’s so much fun for fans every time that you get to reveal the name of a villain; comic book fans are just waiting for those ridiculous, iconic names to be said on screen. What’s that like for you, getting to reveal the icons and have that as part of your character?

CV: Well, you know, I have to give the credit first to the comic book writers who gave them those names 50 years ago, 75 years ago.

But it’s an honor. It really is! I mean, first of all, the writers came up with a really neat convention, you know? To justify these names, they have Cisco coming up with them with his unusual style, and I think that works really well. I think they did something smart and I’m trying to do it justice as best as I can. It’s an honor.

There have been some cool moments and nods to Cisco’s comic book alter ego, is that something you’re vibing on, getting to do that in the future?

(laughs) To be super obvious and puntacular…

CV: I think, yeah, that’d be really nice. I can tease that fans can expect some big questions about the Vibe mythology to be answered in the next episode, the season finale here.

Yeah, we’ve been waiting since that mid-season trailer, where we saw that visor…

CV: Yeah! It looks good, right? You’d think, right? They’re kind of giving you the lollipop, but they’re not really giving it to you, they’re just holding it in front of your face.

What is the most surprising thing for you about coming into this DC Comics TV Universe?

CV: The most surprising thing. Huh. The most surprising thing is how supportive the network and the team are of the entire effort. We are living in an age where superhero media is huge. It’s easy for that to become stale, or become a fad, but I think we’ve kept it going strong in terms of fans’ interest because we’ve given it care, and we’ve given it dimension. We’ve given it something unique and different. I think that’s what has made the show such a success, and I’m really happy to be a part of it!

Now that you’ve had a full season to really build this character and get comfortable with him, what are some things you’re personally hoping for, for Cisco, as the show continues into season 2 and beyond?

CV: I hope he continues having romantic quandaries! You know what I mean?

That was fun this week, for sure.

CV: Those are really fun to play, because they’re an added dimension in his trajectory of growth. If he learns more about his romantic side, I think that’d be really fun to see.

The Walking Dead: First Look at Maggie and Glenn's Son Hershel in Season 10