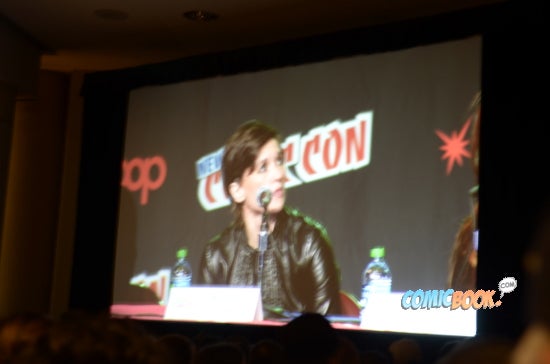 A teaser trailer was shown of a town dotted with major fires and voiceovers about Carrie and the circumstances around everything that happens. It ends on Carrie, covered in blood, standing in the middle of an intersection in the center of town.

All of the panel was unified in explaining that, though they certainly hold Brian De Palma's work in high regard, they were trying to stay much more faithful to the source material in this film. Moretz specifically expressed she had not gone over the film and wouldn't have wanted to prior to her work, as it would lead to second guessing whether her version would be as well received as the original. Peirce was very clear that she loves and respects De Palma's work (and is a personal friend), so the move to differentiate isn't meant as a slight at all.

The first question from a panelist was asked by a fan in a full Kick Ass costume, who wanted to share that he was added to the Kick Ass 2: Balls to the Wall cast, based on his cosplaying. After Moretz led the crowd in applauding his success, he revealed his question was if he could talk to her after the panel. Moretz let him down gently in saying they could have their chance at a "moment" on set.

The other highlights of the panel were Julianne Moore being asked a question about the movie's statement on bullying (a timely issue these days) being asked by her daughter's teacher and Peirce & Misher supplying a rough estimate to a fan that 1000 gallons of fake blood were used. Moretz added that there were times where she didn't have an inch that wasn't covered by blood, but Peirce would say, "MORE BLOOD!"