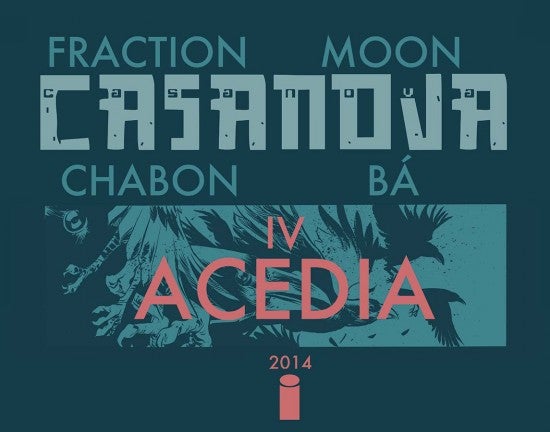 Best-selling novelist Michael Chabon will pen backup stories for new issues of Matt Fraction and Fabio Moon's Casanova, Fraction revelaed today at the Image Expo. The fourth miniseries, titled "Acedia," was already announced but is finally coming along in 2014. Casanova escaped the complicated and stressful life of a dimension-hopping, identity-shifting, sexually voracious killing machine and we last saw him wandering out of the wreckage of a UFO that landed in the Hollywood Hills. It's our Los Angeles. It's our Earth. And he remembers absolutely nothing of his past. "There has literally never been a better jumping-on point for new readers," said Fraction.  "Our main character has no idea what's happened in the other Casanova books either... If that weren't enough, Pulitzer Prize-winning author Michael Chabon joins series co-creator Gabriel Bá to create a dazzling array of backup stories that explore the worlds—and the people—Casanova left behind." "Buckle up buttercups, here we go," Fraction said at the Expo. Image Comics will also be publishing "fancy-ass hardcovers" of the previous volumes, Fraction told the audience. "I'm very excited to be back on Planet Casanova again." "Casanova is one of my all-time favorite comics, and I think I've been pretty open about how gutted I was when Matt and the twins chose to take it elsewhere a few years back, so it should really go without saying that I am incredibly thrilled to have this book back at Image," said Eric Stephenson, Publisher at Image Comics. "Anyone who is as big a fan of Casanova as I am is going to be amazed by everything the guys have planned this time around."