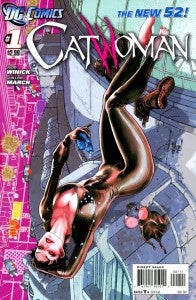 If the old saying goes that cats have nine lives, then a character such as Catwoman has certainly burned through a few of those where her own ongoing solo series is concerned. As part of the DC relaunch, Selina Kyle gets another go as Catwoman #1 arrived in stores just a few days ago, another part of the now very large number of "Bat" books being produced with this initiative. There's no shortage of stories for the character, and her complicated history as an anti-hero of sorts has always made her a compelling character. Throw in her relationship with Batman, which we learn she now no longer knows who he is, and there's even more depth to explore. Having said all that, this first issue shows us some of that layering and depth present in the character, but a bit too much reliance on her sex appeal feels weak considering how powerful she is on her own. Certainly though, this book earns its "teen plus" rating.

We're quickly whisked into Catwoman's world within just a few panels, as her home is under siege for some reason from some very angry men, so she grabs a few items, kittens as well, and books it out the window as fast as she can, only to watch the place blow up soon after the invasion. Writer Judd Winick certainly knows the Batman world, as he's spent years off and on writing various incarnations of Bat-stories, and he certainly gets the overall feel of the character, someone who has a clear moral code of their own and makes decisions that vary between self-serving and self-sacrificing. We get to see Selina's dual sides in this issue, such as when she goes undercover to make some cash off the Russian mob for herself but ends up avenging a horrific crime perpetrated by someone who happens to be in the bar she's infiltrated. The beating he receives is pretty brutal, and like much of Guillem March's art in this issue, it lends weight to Selina's poise and striking physical presence.

There are times however, when that physical presence plays a bit too one-note. Catwoman is more than sex appeal and sexiness, and while she has used that to gain access to many things and people over the years, it's not her defining trait. The final scenes of the book with a partially clothed Batman and Catwoman locked in a physical "state" are interesting and unexpected, but I wondered if it was a bit too much for this first issue. Yes, she and the dark knight have a history, but is that needed territory to get people hooked into an already great and fascinating character out of the gate? It rang a little too much to me, and brought back unpleasant thoughts of Red Hood and the Outlaws #1 and its mostly unfortunate use of Starfire. While Catwoman does come close to that, it flirts with it, something that Selina Kyle certainly understands. A solid issue overall, and the character's life from here is wonderfully complicated, just what we love and expect from the character. Grade: B+

Catwoman #1 Review: For Grown-Up Cats Only!