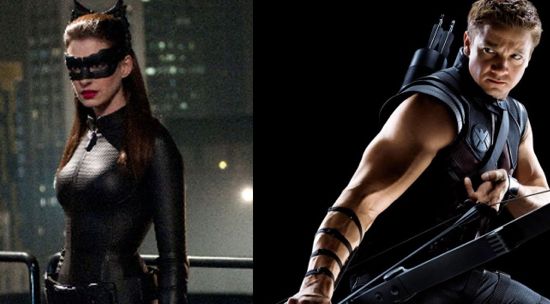 Two of the stars from two of this past summer’s biggest movies have signed on to host upcoming episodes of NBC’s Saturday Night Live. Anne Hathaway, who won rave reviews for her portrayal of Catwoman in The Dark Knight Rises, will be hosting Saturday Night Live on November 10, 2012. The musical guest for her episode will be Rihanna.

Earlier this year, Joseph Gordon-Levitt, who played John Blake in The Dark Knight Rises, hosted Saturday Night Live. Somewhat disappointingly, Joseph Gordon-Levitt didn’t do a single skit involving Batman, but instead he did a bit involving Magic Mike during his opening monologue. We’re hoping that when Anne Hathaway and Jeremy Renner host that Saturday Night Live doesn’t overlook the opportunity to poke a little fun at this summer’s two biggest movies.