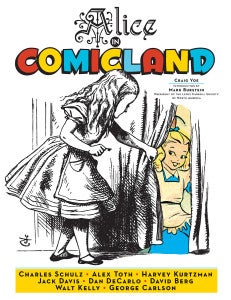 A number of Alice in Wonderland's rare comic book and comic strip appearances are being collected in a new, hardcover volume from IDW Publishing that will include work by Peanuts creator Charles Schulz and legendary illustrator and animator Alex Toth. Due out in March, Alice in Comicland is a 160-page collection of comic books and comic strip stories featuring Alice that range from humor to horror by masters like Alex Toth, Walt Kelly, The Simon and Kirby Studio, Dan DeCarlo, David Berg, George Carlson, Harvey Kurtzman, Jack Davis, R.F. Outcault, Charles Schulz and more. The Kelly, DeCarlo and Schulz strips are reproduced directly from rare original art making this a truly unique piece. For the first time one place, readers get to see Alice get the MAD Magazine and Archie's Mad House alongside Alice gruesomely starring in the banned horror comic book stories of the 1950s, riding on a flying saucer, meeting Santa Claus, as a teeny-bopper, hanging out with famous comic characters and more. "Lewis Carroll's Alice is one of the most imaginative creations in history," said Craig Yoe, whose Yoe Books will partner with IDW on the release. "As I dug into comic history I was thrilled to find how many cartoonist geniuses were inspired by Wonderland and had done there own very unusual twists on Alice in every comics genre. This is an amazing, exciting book sure to delight Alice and comics fans!"

Charles Schulz, Alex Toth and More to Be Collected in Alice in Comicland