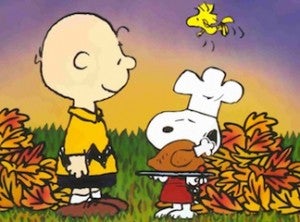 When It's the Great Pumpkin, Charlie Brown was on TV this year, a "parents' advocate" blogged that the show enshrined bullying and negativity, and ought to stop being played on TV lest it somehow damage American children.

Apparently, people disagreed with his assessment, as the next Peanuts TV special, last night's Thanksgiving installment, hit a four-year ratings high, doing 22% better than it did last year among the key demographic advertisers want most and increasing its ratings among kids 5-11 as well, according to TVLine.