I absolutely love it when people take something in pop culture that they love and really drill down to find answers that all of us want to know/see but don't have the time to figure out.  You know, like how many days Bill Murray/Phil Connors spend trapped in "Groundhog Day? Or what day was actually Ice Cube's good day for the song "Good Day?" Today, I stumbled across another one: a map of Panem from "The Hunger Games."  The Suzanne Collins book-turned-movie tells of a post-apocalyptic North America that is controlled by a place called "The Capitol."  There are 12 Districts that are under control of The Capitol and they each play a role in providing resources to the citizens in The Capitol. Two bloggers, aimmyarrowshigh and badguys put a ton of work into this thing, and it's awesome. Here is the map, followed by some justification of the location of the Districts by the creators. 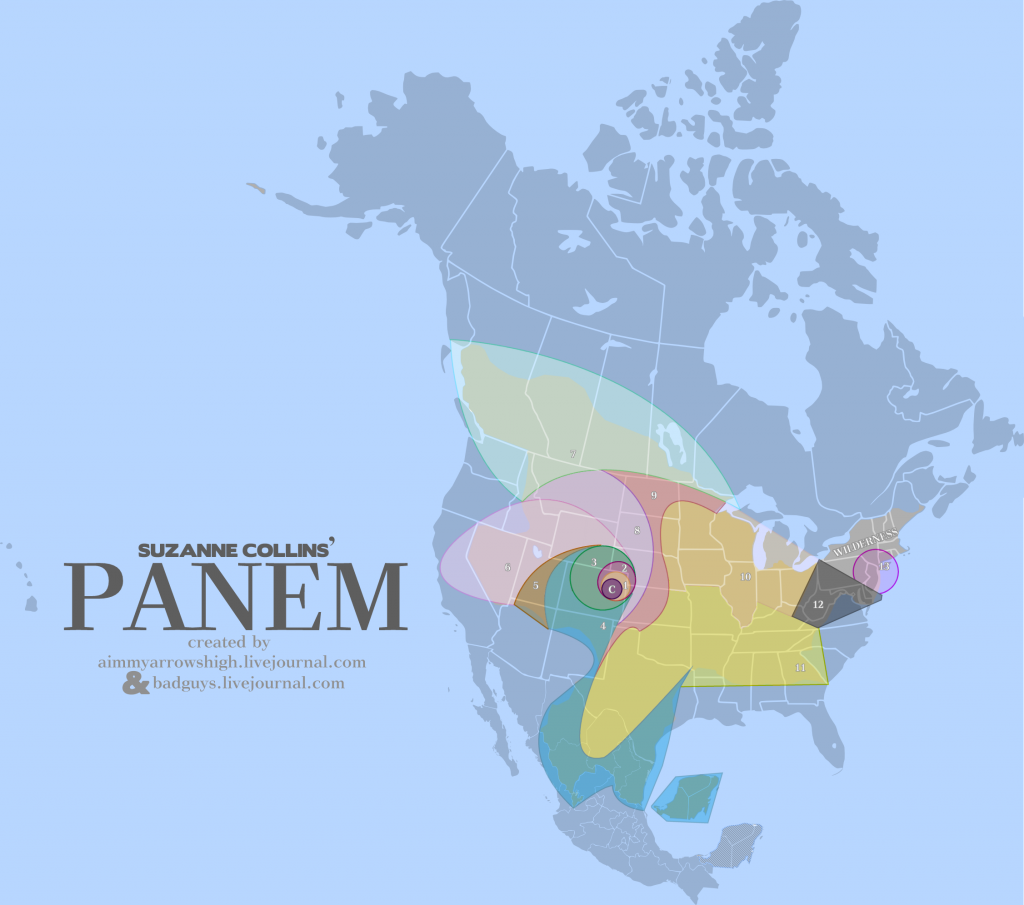 Here's what we know.The Capitol is in Denver.D12 is Appalachia.D11 shares a border with D12, is one of the largest districts, is South of D12, and is primarily used for growing grain and produce.D10 is primarily used for raising livestock. They do NOT process the livestock in D10. However, to feed an entire nation, D10 is likely another very large District.D9 processes food for the Capitol and the tesserae; therefore, it likely shares borders with the food production Districts (D4, D10, D11).D8 produces and treats textiles and is a factory District. It is POSSIBLE to reach D12 from D8 on foot over a course of weeks/months. Therefore, it does not cross a large body of water.D7 specializes in lumber. It's probably large. It has no role in food processing or manufacture.D6 works closely with the Capitol in the research and manufacture of drugs (morphling, medicines). It likely has close ties to D5 in the production of mutts.D5 is entirely dependent on the Capitol, so it's probably somewhat nearby, and specializes in genetic research and manipulation. Because of the necessity of creative thought and intellect, it's most likely a smaller District so that it's easier to monitor and control.D4 is the ocean. It does have a role in food production. It's very large. It is a Career District, so it likely is near the Capitol and has some self-sufficiency, but not enough that it doesn't engender loyalty. (Aside from that, D4 = perfect.)D3 has extremely close ties to the Capitol and works with electronics and technology. It is likely small, the Capitol can closely monitor its scientific minds. It has no role in food manufacture or processing.D2 specializes in weaponry, is the most loyal District (because the Capitol needs to keep its weapon specialists happy, non?), and has no role in food production. D2 also works in some minor Mining elements and trains Peacekeepers. The Panem railroad is easily accessible in D2.D1 produces luxury goods for the Capitol -- INCLUDING having a diamond mine. Kelsey Lake Diamond Mine is a defunct diamond mine in Colorado, USA. It is located in the State Line Kimberlite District, near the Wyoming border.D13 specialized in nuclear power, shares a border with D12, is both visible and reachable from D12 by foot, and is North of West Virginia. Three Mile Island was in New York Pennsylvania, and probably remained a nuclear reactor or was co-opted again as a reactor. D13 is small but mighty and is surrounded by Wilderness. It is self-sufficient.

Excellent stuff by aimmyarrowshigh and badguys.

Check out the Map of Panem From The Hunger Games