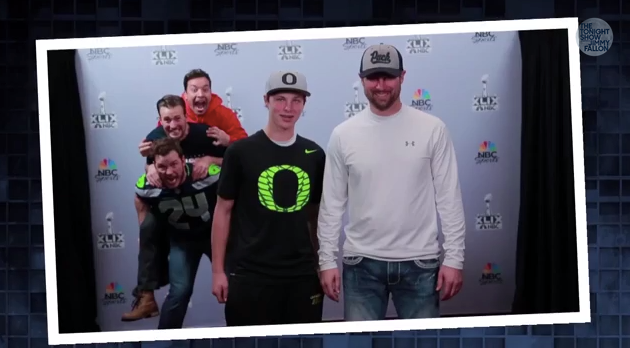 We already declared Chris Pratt and Chris Evans the true winners of the Super Bowl, but their Big Game domination continues even days after the final whistle blow.

In last night's episode of Late Night With Jimmy Fallon, the late-show host revealed that he, alongside Pratt and Evans, photo-bombed unsuspecting Super Bowl visitors who posed in a photo booth at the the University of Phoenix Stadium. The trio's team-up knew no bounds, with Pratt, Evans, and Fallon giving each other piggybacks, dancing with Hawaiian leis, and performing devious acts with Italian sandwiches. While many seemed to be unaware of the acts occurring behind them, a few were surprised to discover the celebrities who were partying behind them.

As many recall, Pratt and Evans, Seattle Seahawks and New England Patriots fans, respectively, attended Sunday night's Super Bowl after placing a bet that their team would bring home the Vince Lombardi trophy. The actor with the losing team, according to the bet, had to visit the winning team's home city dressed as their Marvel character. And with Evans' Patriots as the Super Bowl champions, a Boston-based appearance for Star-Lord should come any day now.