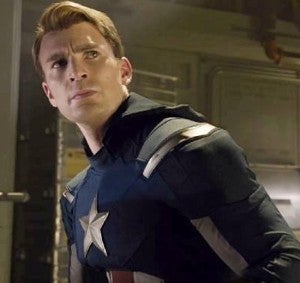 In a question and answer session on Spreecast earlier today, Chris Evans talked about several of his past and upcoming movie projects, including Fantastic Four and Captain America: The Winter Soldier. Here’s a rundown of what Evans had to say about his experiences playing both Johnny Storm and Captain America.

What was favorite movie to act in? Chris Evans said, “Let’s make it this, let’s make it not what was the most rewarding or what was ultimately most satisfying, but my favorite just to act in. Man, I may say the first Fantastic Four, just because it was one of the first times I had done a movie on that scale, so there were a lot of new things I was learning. I was learning so much just about big budget movies and special effects. I got to be a superhero, which was fun. Cast was great. It was just the first time it felt like a real big production. It kind of felt like summer camp. It was just a lot of fun. I loved playing that character.”

Which co-star would you love to work with again? Chris Evans said, “Let’s not base it on acting ability, because that’s impossible, I’ve worked with so many good…phenomenal actors. It’s a blessing to share the screen with them. Let’s go just based on personality and who I got along with, which I guess is probably just as damning. I’m going to say Ioan Gruffudd, the guy who actually played Mr. Fantastic. He’s just hilarious. I’ve never worked with someone…he’s a big kid. He really is like a nine year old, but he’s very positive, very sharp, very funny, and we had very similar senses of humor. He was so much fun, and I did get to work with him again. I worked with him last year in a movie called A Many Splintered Thing. He had a small role, but I got a couple days on set with him. I laughed the whole time.”

What is favorite part of being the Captain America? Chris Evans said, “The best part of being a part of the Marvel world is that it allows you to do other things. If I hadn’t taken Captain America, I don’t think I would be able to direct. Doing those big movies with big profile properties, and movies that get seen and make a lot of money, in turn you’re afforded an opportunity to go do passion projects, but that’s not a very fun answer. What’s the best part of being Captain America? I really like playing a good superhero, a lot of superheroes…not that there are bad superheroes, but a lot of superheroes are tortured souls and they have demons they are fighting. Caps just a really good guy. Aside from being a superhero and having powers, he’s just a really good man.”

Who is your favorite Avenger besides Captain America? Mine’s Iron Man, because duh, Robert Downey Jr.! Chris Evans said, “I’m going to have to agree with you. Robert Downey Jr. is not only an incredible cool superhero as Iron Man, but he himself is really just a special person. He’s just one of these guys whose been through so much and is so experienced and knows so much. He just knows so much. The guy has been through everything, and he’s come out on top. He’s just one of the biggests forces of nature on the planet and deservedly so. He’s an amazing person.”

What was the best part of filming Captain America: The Winter Soldier? Chris Evans said, “I will say reconnecting with a lot of people. There were so many people that I knew. It’s like when we’re were in high school, we come back…elementary school, middle school, you break for summer and then coming back in the fall, it’s so exciting to see everybody again. And we had Sam [Jackson] and Scarlett [Johansson] from The Avengers. Scarlett, who this is like my ninetieth movie with, she’s like my sister at this point. Sebastian Stan, who we did the first Cap with, whose just like the sweetest kid on the planet. And Mackie, he’s my dude, I’ve done a couple movies with Mackie, this is my third with him. I just felt like these are all my old buddies that I can go play with.”

Do you ever catch yourself acting like Steve Rogers when you’re not working? Chris Evans said, “I would be so lucky. That’s the goal, I strive to do. You know, I don’t necessarily know what Steve Rogers’ religious affiliation would be or political stance, but I think the cornerstone of his being is selflessness. I think he just tries to put himself last, and that extends to all facets, even just in a debate, a discussion. I think he’s going to try to listen to the other person before he tries to get his own point across. If I ever see shadows of Steve, I’m doing something right.”

What’s it like being part of something so big like The Avengers? Chris Evans said, “Intimidating, a little overwhelming, but you’re overwhelmed with gratitude. When you’re making it you don’t really know it’s going to be that big…even when it comes out, this is the tricky part this business, you forget what’s really happening, it’s like work. I don’t know how to explain it. I try to think about what I would have thought when I was eighteen before I started this career, and I think it would have been radically different, but over time the more movies you make and the more you get used to the routine of movies coming out, doing the press, and you move on and try to get another job, and it all become just a piece in this puzzle of work and kind of…not disillusion, I don’t want to say disillusion, because it’s still very amazing, maybe just a little desensitized. You’re still grateful, but you’re not just sitting there like, ‘Wow, look at this, look what I was a part of.’ It doesn’t always feel that way, which is a shame, because it should. And I think that’s part of what I try remind myself of…not that I was a part of something amazing, but just to be appreciative and grateful, because gratitude is the key to happiness. If you have a healthy understanding of gratitude, you can’t lose.”

Will you miss the Cap/Peggy relationship? Chris Evans said, “Of course, mainly because of Hayley Atwell, she’s phenomenal. She’s just an amazing, amazing actress and an amazing human being, sharing the screen with her is just a blessing.”