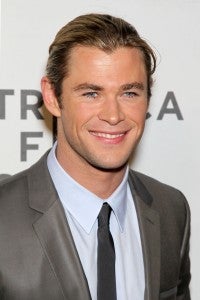 In an interview with Empire released today, Thor and The Avengers star Chris Hemsworth was asked whether he would consider playing He-Man in John Chu's upcoming reboot of Masters of the Universe.

The actor, who appears in a remake of Red Dawn headed to theaters soon, was named as an ideal candidate for the project from previous movie He-Man Dolph Lundgren.

"I can't play He-Man, it's pretty much Thor, isn't it? " Hemsworth is quoted as saying by Comic Book Movie.

It's probably a valid concern; with a Snow White and the Huntsman sequel in the offing, it seems like he'd probably want to minimize the number of times he runs around in scraggly hair and period clothing hefting a big, close-quarters weapon lest he be typecast.