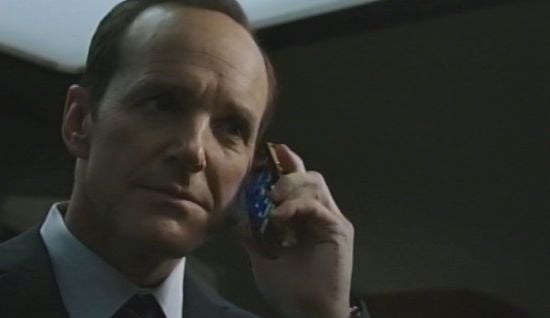 It seems that Clark Gregg has given up on trying to impress fans who have written off Agents of S.H.I.E.L.D. When asked by The Salt Lake Tribune about complaints from “geekier” fans about there not being enough Marvel heroes in the show, Gregg said “Those aren’t geeks. Those are losers.”

Agents of S.H.I.E.L.D. has struggled with complaints about there not being enough superpowered characters for a show set in the Marvel Cinematic Universe (which is kind of ironic, given that ABC’s initial tagline for the show was “Not All Heroes Are Super”). ABC has opened up about some of the events coming in the second half of the show’s first season – such as Mike Peterson’s (J. August Richards) transformation into Deathlok and Lady Sif’s (Jaimie Alexander) guest appearance while tracking down the Asgardian villain Lorelei – perhaps in an effort to let fans know that the good stuff is still to come.

"You start to have people like Deathlok showing up," Gregg said. "You start to understand that a bunch of these different episodes were connected. A lot of the geeks that I respect most … are very excited about where we’re going. So I’m going to choose to work for them."

Other actors, such as Ming-Na Wen (Agent Melinda May) and Brett Dalton (Agent Grant Ward) echoed some of Gregg’s frustration.

"I love our fans so much, but they want the end of it already," [Wen] said. "We have 22 episodes and, hopefully, years to come of stories and developing characters, and all we want is our fans to just be patient and not come down hard. Go with us. It’s a slower ride."

"Hopefully, a five-year-plus ride," interjected Dalton.  "And I think all of the stuff that they want, we have in store."

Clark Gregg Says Fans Who Gave Up On Agents Of S.H.I.E.L.D. Are Losers

Alicia Clark Is Shocked to See a Familiar Face in Fear the Walking Dead 614 Trailer: "Mother"

Fear TWD: Sherry Still Has a Score to Settle With Negan on The Walking Dead