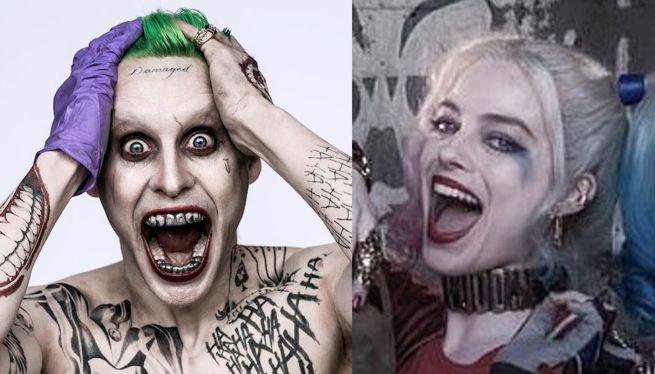 Spoilers! This video provides a close-up shot of the scene that was filmed on the Suicide Squad set between Jared Leto's Joker and Margot Robbie's Harley Quinn.

I'm 99.9 percent sure this is a flashback scene. That's because Margot Robbie sounds, acts and dresses more like Dr. Harleen Frances Quinzel just before she loses it and becomes high-pitched voice, bubble gum-blowing Harley Quinn.

The scene begins with Dr. Quinzel standing in front of a luxury sports car. She screams, "Get out of the car!"  This is when the driver's side door opens up and The Joker (Leto) emerges. He walks up to Quinzel and begins to talk to her in an animated fashion. She tries to embrace him but he appears to softly reject her. Their spate in the middle of the road is causing a logjam of vehicles. One person that is peeved by this nuisance is a trucker who walks over to them with a tire iron. Joker turns to acknowledge him, a few words are spoken, and then Quinzel reaches... for a gun and shoots the truck driver. Surprise!

The trucker's death doesn't faze the couple and they continue to argue. This is when The Joker slaps Quinzel to the ground and walks around his car. The couple have another brief exchange and then Joker slinks back into his vehicle. By the way, his license plate is "HAHAHA."

Check it out in the videos below.

Suicide Squad is being directed by David Ayer and is set to be released August 5, 2016.