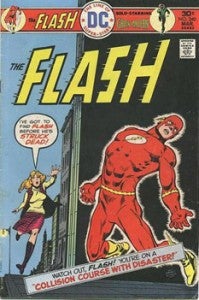 I can remember being in middle school and on a vacation to the beach with my family. My mother's love of paperbacks always dictated a stop at a used book store at the coast called Twin Bookstores, so named because it was in two identical buildings. It was there I purchased my first comic book, a copy of The Flash #240, which promised that the Flash would be on "a collision course with disaster!" That single issue led to more and more, especially on those beach trips. For many collectors, of anything, it's the same story. That first spark of wonder and fascination often gives way to a lifetime of collecting, no matter what it is. In my case, I started collecting comics from that point in middle school on, kept going until college (who could afford then then!) and then picked back up with a vengeance about six years ago. Now, half of a room of my house houses over 4,500 comics, along with several graphic novels and busts of superheroes! This begs the question: WHAT HAPPENS NEXT!!?? Don't get me wrong! I love my comic collection, and I enjoy it. It's always fun to go back through your books, revisit the weathered pages, smell the must of the decades old paper, but I find myself pausing now and then, when I'm incorporating new purchases into my short boxes or flipping back through some back issues of Spider-Woman and a thought creeps into my head; how much more space will I need if it keeps growing? Should I begin scaling back? If I decide to start selling some of these, which ones will I keep? I have to assume that other collectors experience similar feelings from time to time. No matter what you collect there must come a point in time where you question your decision to keep going or not. Should I keep adding more salt and pepper shakers to the wall? Am I content with just collecting these fourteen pieces of art by one artist? Some collections are very finite, such as having a complete set of a type of plate pattern or a family of books by one author. For the comic book collector, unless they are collecting a certain title or titles only, there probably will never be an "end". That is part of the fun of it, but as my collection grows and grows and I find myself not really caring much anymore about how many Silver Age Amazing Spider-Man's I have, the question has started to creep in my mind as to what to do with them. I have thought about paring down, just to only, let's say Avengers, Fantastic Four, Batman, and Wonder Woman titles, but I'll think of some of the issues I have, say of X-Men that was a great story, or a cover of Amazing Spider-Man that Kirby did that I just like looking at and I realize I can't do it. Nor could I probably part with my issues of The New Mutants, even though it was a title I never really liked. The funny thing about being a collector is the way you begin finding reasons to hold on to every issue, every multi-produced 90's hologram cover, even though you may not have taken it out of its backing board and sleeve for years. "No, can't get rid of that one, I love my six copies of X-Men #1". And I have to say here that even though the 90's are seen as a blight on the history of comic collecting, for those who were in high school during that time, like me, it was an era marked with so many titles, relaunches and special events that it did lead to, at least for me, a couple of extra purchases that I may not have otherwise made! Which leads me back to the present, and my pouring through those short boxes, seeing those copies of X-Men #1, the holographic Venom covers of any Spider-Man book all mixed in with my classic Fantastic Fours and Detective Comics makes me wonder if the desire to prune is coming out of a want to clear space for "better" books, my favorite titles, or is it just a natural outgrowth for some collectors. Is the need to pare down a sign of staying a true "collector" and avoid being labeled a "hoarder", or is it the nature of the space available. Would I feel the same way if I was housing the same amount of comics in a warehouse, or would I see an immediate need for life-size cutouts to fill the space? For collectors, the psychological and emotional ties we have to our collections are often too complex to fully be communicable to those who don't share a similar passion or hobby. What may appear to be a stack of "funny books" to them are piles of gold to us. We can however learn some tricks and tips for organizing our space or streamlining

Comic Book Collecting Conundrum: What to do With a Growing Collection