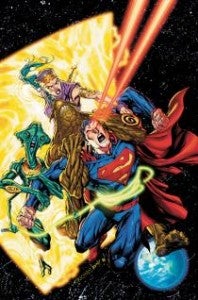 If you've been following comics at all this summer (and this weekly feature, and why wouldn't you) you KNOW how busy it's been!  Every publisher has been pushing some quality reads from a variety of characters, and big announcements from comics have been in the mainstream media all summer as well.  It's a good thing, then, that you have a holiday this coming Monday to catch up on it all, including what's arriving in stores this week!  Let's check in and see what the hot books are for tomorrow, the last Wednesday in August.

Superman Annual #1  It's raining annuals at DC this week, and this one with Superman is all about hunters vs. the hunted.  A special visit from the new Green Lantern is here, too!

Detective Comics Annual #1  One of the more grim books of the new 52 brings you all out action as Batman and Black Mask finally face off in this thriller.

Justice League International Annual #1  So just what WILL happen to this collection of heroes fresh off their cancellation?  Like I'm going to spoil it here!

Justice League #12  Ok, yes, Superman and Wonder Woman hooking up is the big draw, BUT there's also a kick-ass story here and a shocking final page, as "The Villain's Journey" continues.

Aquaman #12  The battle with arch for Black Manta concludes here, and find out who is the traitor in the midst.  Also, just who has been pulling Manta's strings?

Green Lantern Annual #1  The battle with Black Hand wraps up here, and judging this book by its cover may just give you a clue!

The Flash Annual #1  It's what Flash fans look forward to the most, an all out battle between Flash and his Rogues!

FF #21  A stunning series of events sees the Inhumans returning to Earth.  How will this affect the Fantastic Four and the FF?

Captain Marvel #3  One of the best new books of 2012 is back with a bold new direction, yet a familiar face in the Prowlers for Carol.

Avengers vs. X-Men: Versus #5  It's the spousal smackdown edition, as Storm takes on Black Panther!

Gambit #2  Gambit goes for those things just out of his reach once again, but has he gotten into more than he can handle?

New Mutants #48  This book is winding down fast, so don't miss their final battle against the Hellions!

X-Force #30  The Brotherhood of Evil Mutants are making a comeback, and "Final Execution" is hurtling towards a conclusion.  Don't miss it!

Winter Soldier #9  The hunt is on, and the Black Widow finds herself at odds with her past actions.  And hey, there's a crazy Russian programmed spy on the loose!

Morning Glories #21  The hit series brings you another great issue, and yeah, there IS always someone to run from.

Prophet #28  It's all about clones here, as great-grandfather Prophet searches for a younger version of himself, as well as his old Starship.

The Walking Dead 2013 Calendar Need zombies DAILY?  Then pick up this undead treat!

Skullkickers #17  It's the conclusion of the "Six Shooters on the Seven Seas" story!  If you're a fan of death, well, read on.

Mudman #5  It seems that Mudman doesn't have the best control over the substance that bears his name.  See how it plays out here.

Angel & Faith #13  Things aren't going as planned for Angel, Willow, Faith, and Connor.  How much longer can they stand the hell dimension they're in?  See how they craft an escape!

Axe Cop: President of the World #2  The phenomenon continues.  I can't even describe what happens here!