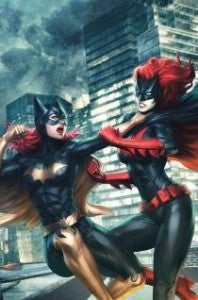 The comic book action continues this week as we creep more and more into late summer.  This week has no shortage of action, with lots of big brawls taking place in the hot books for this week!  If you're a fan of action, there are several issues this week that are not to be missed!  We'll start over at DC Comics, who are featuring quite an interesting matchup from the pages of one of the new 52!

Batigrl #12  It's Batgirl vs. Batwoman!!  The two heroes are on a collision course as each is on their own path in the hunt for Knightfall.  What does Batwoman's role in this case have to do with Batgirl?  I guess we'll find out after blows are exchanged!

Batman #12  The final chapter of the Court of Owls is here, and just in time, as the next issue shows the return on Joker!  Oh, but be sure to get the zero issue as well!!

Resurrection Man #12  The final issue is here, and once and for all Mitch will get the chance to see who has been manipulating the events in this life thus far.

Superboy #12  A monster is on the trail of Superboy, but it's more than just a run of the mill fight.

Grifter #12  Grifter vs. Hellspont!!   That's all I can tell you about this one, that and it has an awesome cover!

Before Watchmen: Ozymandias #2  The early years continue to be revealed about one of the most controversial characters from the Watchmen.

Gambit #1  Everyone's favorite cajun X-Man is back in his own series, and it's a new world for the charming southern thief.

Fantastic Four #609  It's another visitor from the future for the FF, as the Defenders make a trip to the past to get one of the FF for help.

Space: Punisher #2  Punisher vs. Hulk!  Another big battle for this week, and this issue brings it to you, in space!

Wolverine #311  Sabretooth is indeed back, but which one is the real him?  What???

X-Treme X-Men #2  It's all on Dazzler in this issue as she continues to hop around the various dimensions, but will clashes over leadership of the team bring it all to a close?

New Avengers #29  The Illuminati take center stage here, but have their repeated failures to stop the Phoenix before doomed Earth today?

Captain America #16  The public is supposedly turning against Cap, but if Reed Braxton is dead, then what's he doing on TV?

Buffy the Vampire Slayer Season 9 #12  So Buffy thought working for Deepscan would distance her from demons, right?  Well, this issue may bring her closer than she expects.

The Creep #0  A dead boy and his friends are part of a disturbing story in this issue, as a mother searches for answers from an old flame with a new look.

Star Wars: Lost Tribe of the Sith #1  A planet ruled by the Sith is the focus of this tale, where a Sith rebel will challenge the status quo.

The Massive #3  The crew of the Kapital was on the run from pirates, but should they reconsider their mission as a new one is created here?

Blue Estate #12  The first season is at and end, and like any good season finale, there's gunfire, intrigue, and more in this finale!

Dancer #4  Alan's in a race to save Quinn from an assassin, but what happens once the final showdown occurs?

It Girl and the Atomics #1  Spinning out of the pages of Madman, Snap City's heroine gets her chance to shine in these new adventures.

Bloodstrike #29  Bloodstrike's not too happy about what the Quanta have done to them, but how they get back and get out won't be any prettier.