The end might be nigh, but there are STILL new comic books coming out this Wednesday, so be sure to pick these up! Seriously, I think we'll all be ok, but just on the off chance, you want to be sure to grab these, as there's lots of good stuff coming your way from your favorite publishers this week!  Just read on and see what I mean! Marvel has a doozy of a week, so let's start there! 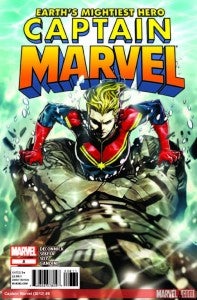 Avengers #2  The roster is bigger, the global span greater, and of course that means that the danger is bigger as well! Be here as the new team takes shape!

Captain America #640 The end is here, and Cap and Black Widow face off with some of the multiverse's baddest in this finale issue!

Thunderbolts #2 The new team of misfits, led by Red Hulk, is taking it back to the baddies, and fire will definitely be fought with fire!

Uncanny X-Force #35 Another end is here, as groundbreaking final pages and the remnants of X-Force may not be who you think!

Cable and X-Force #2  Sad about the above issue ending? Don't be! See who's on the team in this new ongoing series!

Avengers Arena #2 It's The Hunger Gam...I mean a new series from Marvel pitting youngsters against each other in a combat arena!

Captain Marvel #8  Carol Danvers gets a little help this issue from Monica Rambeau, an earlier wearer of the Captain Marvel mantle!

Nightwing #15 The Joker comes to Haly's Circus, and you can bet that it's not just to take in the show! See what Nightwing faces in this "Death of the Family" tie-in!

Batwoman #15  Batwoman and Wonder Woman's biggest test is here, as Medusa begins to wreak havoc in Gotham City, and Batwoman's girlfriend is in the line of fire!

Wonder Woman #15  Speaking of the Amazon, Wonder Woman comes into contact with the New Gods, Orion to be specific!

Catwoman #15 After her run-in with the Joker, stealing from Eclipso can't be that bad can it? Can it?

Birds of Prey #15 Who leaves and who joins in this issue? Also, something's wrong with Black Canary, but is it for the worse or the better?

Supergirl #15  H'el on Earth continues here, as Kara faces H'el head on, and he forces her to make an impossible choice.

Angel & Faith #17  Giles' soul is almost back together again, but Ethan Rayne may be up to something with making things so easy!

Dark Horse Presents #19  It's a fun sampler platter this month, with a taste of Mind MGMT and Station to Station here for you to savor!

R.I.P.D.: City of the Damned #2  The R.I.P. Department is investigating Black Pool, but how much madness and terror awaits the team?

Number 13 #1  The future, a viral plague, and mysterious creators lurk in the debut issue of this new series!

Rotten Apple  Hey, in the mood for a one-shot described as a"Cannonball Run for a mystic relic"? Then pick this up!

Haunt #28  The return of Purgatory happens in this issue, and some secrecy about the Kilgore brothers and Still Harvey Tubman surface.

Supreme #67  Omni-Man is here, and the combat with Supreme is the just the beginning!!

America's Got Powers #4  The government's involvement in the lives of powered teens gets more complex, and can The Rejected do anything to alter it?

Happy! #3  The next to last issue is here, and before the clock runs out on Santa's victims, Happy learns what made Nick a hitman. Will this change things?

Adventure Time #11  A new arc begins here, so jump on the adaptation of the runaway hit cartoon series!

Freelancers #2  A fan of Kung-Fu bounty hunters? Like reality shows? Why not combine the two!

Hellraiser: The Road Below 3  Kirsty Cotton is caught in a war she wants no part of, so she'll pick her own side to fight for!