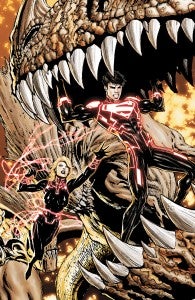 It seems like a time for beginning and a time for ending, as several new books will arrive on shelves in the coming weeks and some books will see their final issues bow later this summer.  For the time being however, we have some very current and fresh books arriving in stores tomorrow.  There's plenty to keep you busy as you either mourn the loss of your favorite but perhaps low-selling comics or shiver with anticipation as future titles are on the cusp of being released.  Here are this weeks must have books!

Superboy #10  The fallout from The Culling continues, with Teen Titans guest starring in this month's issue!

Batman #10  The Court of Owls find themselves on the defensive, as Batman decides to take the fight to them and their nest.

Before Watchmen: Silk Spectre #1  How did the woman who would become one of the centers of the Watchmen world begin?  Read here.

Green Lantern #10  More information about the Indigo Lanterns continue to unfold here, all building to the conclusion of the current arc.

Batgirl #10  Batgirl is introduced to Knightfall, a villain who promises to become one of Barbara's greatest nemeses.

Resurrection Man #10  Where is Transhuman?  It's too bad this series has been cancelled, as it's quite compelling.

Suicide Squad #10  It's an all out battle this issue, as Basilisk continues to intensify the fighting.

Avengers vs. X-Men: Versus #3  Ding! Ding! Ding! More fights, as Magick fights Black Widow and Colossus takes on the Thing.

Fantastic Four #607  The FF takes a trip to Wakanda, which means the Black Panther, which means, no vibranium???

Captain America #13  The secret identity of Scourge is at long last unveiled here!!!  Don't miss it!

The Mighty Thor #15  The Enchantress sets her sights on Dr. Donald Blake.  What chaos can she develop here?

Avengers #27  The Runaways crash head-on into the world of the Avengers.  What perfect timing in the middle of A vs. X!

Amazing Spider-Man #687  The final chapter of "The Ends of The Earth" is here!  Doc Ock versus Spidey!!!!  A classic!

Planetoid #1  A former solider turned space pirate finds himself stranded on an alien world.  Be here for the first issue of a new series!

Invincible #92  Some questions get answered here, and the return of Cory Walker to the title!

Alpha Girl #3  It's a new world for Judith, and rubber suits, cages and Suburban Waste all await.

The Bulletproof Coffin: Disinterred #5  The next to last issue is here, and a platoon of undead soldiers arises!

Buffy the Vampire Slayer Season 9 #10  Buffy's off on a mission with Spike and Andrew, but the SFPD is handling zombies! Dawn and Xander lend a hand!

Conan the Barbarian #5  The Argos Deception continues, and Conan's days as a pirate may be quickly coming to a conclusion.

The Massive #1  It's a post-post-post-disaster kind of world here, but what of environmentalists in a decimated world?

Steed and Mrs. Peel #6  The final issue of this throwback series is here, and Mrs. Peel confronts the forces behind her family's manipulation.

Incorruptible #30  Speaking of last issues, one of the most shocking series of the past couple of years comes to a close here.

Valen the Outcast #7  Another ending!  We do promise that Boom will have more comics next week as well!!