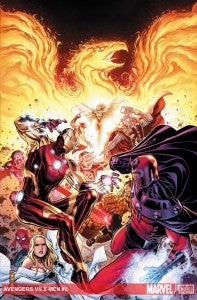 Tax day 2012 has come and gone! Hopefully you're all 1040'ed and W2'ed up and Uncle Sam is getting his due.  Maybe he's already got some cash on the way for you, and you know just what to do with it, right?  Head right on down to the local comic book shop and pour some of that refund into the economy, a local one at that!  This week sees big events continuing, big events starting, and big events just around the corner.  Let's get our due this week and head on in to looking at what hot books are hitting the shelves tomorrow! Marvel 1.  Avengers vs. X-Men #2  When we last saw them, Cyclops blasted Captain America and the Avengers were coming out of a ship to descend on the X-Men.  This is going to go well. 2.  Amazing Spider-Man #684  Silver Sable, Black Widow and Spidey take on Sandman.  No big deal right?  Except he has the entire Sahara Desert at his disposal. 3.  Thunderbolts #173  Moonstone has met Moonstone in this time traveling misadventure, and the repercussions could be disastrous. 4.  Wolverine and the X-Men #9  The time is nigh.  Who will Wolverine side with in the Avengers vs. X-Men battle?  His roots to both are strong. 5.  X-Men #27  In other parts of the X-Men world, Jubilee gets her sword fight on as a group of assassins set their sights on her and other vamps. 6.  Avengers #25  I think you could probably guess what the focus of this issue would be from numbers 1 and 4 right? 7.  Incredible Hulk #7  You will NOT believe the content of this book if I say it, so you better pick it up and find out!! 8.  X-Factor #234  An old member returns, Monet and Layla go at it, and two new heroes arrive in Seattle!  Not bad! DC Comics 1.  Batman #8  It's here!!  This is the start to the multi-title arc "The Night of the Owls" begins here with this kick-off.  The Court of Owls is real, and Batman and all the other Gotham heroes must face that hard, brutal and murderous reality. 2.  Wonder Woman #8  There are lots of chances to say that Diana is going to Hell in this blurb, but literally, Hades awaits. 3.  Supergirl #8  Supergirl's rogues gallery continues to grow with this issue's introduction of the sinister Silver Banshee. 4.  Justice League #8  Green Arrow shows up, and let's just say the fact that he's never been part of the JL does NOT make him happy. 5.  Nightwing #8  Another lead-in to the "The Night of the Owls" story, with Dick facing his own family's connection to the mysterious Court of Owls. 6.  Catwoman #8  Selina has a new "buddy" in fellow criminal Spark, but how long can this partnership last? 7.  Red Hood and the Outlaws #8  Red Robin cameos in this issue.  Perfect timing, as the Outlaws have a hostage crisis to deal with. 8. Legion of Super Heroes #8  Dangerous technology thieves are afoot and Invisible Kid is hot on their trail. Image Comics 1.  The Walking Dead #96  Has Rick risked peace for his group?  Could a chance at peace and prosperity be in the cards for the survivors? 2.  Prophet #24  Mission change!  All Prophet has to do now is cross Sleepingman and try to recover a crashed craft.  Easy, right? 3.  Near Death #7  Markham will go to unusual lengths to help keep a teenager out of the hands of street gang. 4.  The Manhattan Projects #2  The secrets of this infamous WWII project continue to unfold, and the effects are more widespread than imagined! 5.  Super Dinosaur #10  Well, it seems that Exile is more of a threat to Max Maximus than originally thought! Boom Studios 1.  Irredeemable #36  It's a new world, and just how will the Plutonian fit into it?  This stunning series is not to be missed. 2.  Plant of the Apes #13  A great jumping on point here, as a new arc begins.  Ten years have gone by since the last issue, and now a new world order is in place. 3.  Steed and Mrs. Peel #4  If you like a different brand of Avengers, then this is the comic book for you! 4.  Peanuts #4  And if you prefer a gentler, kinder sort of comic, then THIS is the one for you, no matter the age!