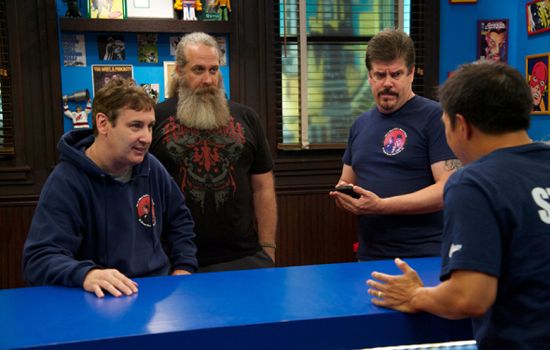 The “Certified Guaranty” episode of Comic Book Men kicks off with Ming complaining that the War of the Worlds movie was ruined by a crappy ending. Walt says only Ming could take one of the most classic endings of all time and call it stupid.

A guy named Rick brings in around 300 silver age comic books to the Secret Stash to sell. Rick says his dad collected the comics and gave them to him to sell to help pay for college. Walt advises Rick that he should pull out some of the best comics and send them to the CGC to have the comics graded and slabbed. Rick says he doesn’t even know which comics would be worth having graded, and Walt offers to have someone he knows at the CGC give him advice.

A seller brings in a Talking Turbo Man to the Secret Stash to sell. The Turbo Man figure was the center of an Arnold Schwarzenegger movie called Jingle All The Way. The seller asks for $150, but Walt initially only offers $50. After some negotiation, Walt agrees to buy the Turbo Man for $75.

A seller brings some Wayne Gretzky collectibles to the Secret Stash to sell. The seller is looking for $2,500 for all his Gretzky plates and figurines. Walt initially only offers $800 for the collection. After some negotiation, Walt agrees to buy the collection for $900. Walt pays more than he normally would for the collectibles, because his boss Kevin Smith is a huge Gretzky fan.

To wrap up the episode, a CGC representative gives Rick an initial assessment of his collection. The CGC representative pulls out several key comics and tells Rick that uncertified he would probably be looking at most getting around $1,000 for the comics. However, if Rick had the comics certified, then he could be looking at getting between $4,000 to $5,000 for them. Rick decides to get the comics CGC certified.