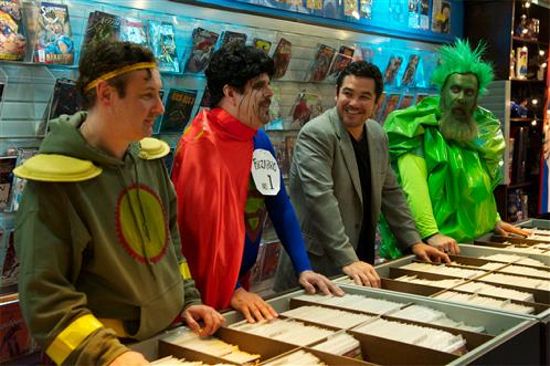 The “Superman’s 75th” episode of Comic Book Men opens with Ming Chen suggesting a reality show with a bunch of superheroes thrown into a house. Bryan Johnson suggests putting Harley Quinn and Power Girl into the house.

A customer comes into the Secret Stash looking for a gift for his dad, who is a big Superman fan. The customer says he is looking for a rare Superman item. Walt Flanagan sends Ming to grab a 1974 Chemtoy Superman figure of Clark Kent from the back. The customer tells Walt that his dad is going to be 75 this year, and the cool thing is that it is also Superman’s 75th birthday.

Walt has the rare Clark Kent figure priced at $149.99, but the customer says he is looking to only spend $50. After some haggling, Walt agrees to sell the figure to the customer for $125 (and he also throws in a Superman button).

After the customer leaves, Walt suggests that the Secret Stash do a 75th birthday party for Superman. Walt wants to go out all out with decorations, food, and costumes. Walt puts Ming in charge of  costumes and Mike Zapcic in charge of food. Walt says he’s going to try to secure a super guest.

Walt holds a meeting with Secret Stash employees to follow-up on party plans. Ming shows off party invites that he created. Mike says he’s working on the food including a cake and super punch. Bryan says he hasn’t eaten in the last 48 hours to save his appetite. Walt says he’s working on a super celebrity guest, but Ming is doubtful.

An African American woman comes into the Secret Stash looking for Lois Lane #106, which is a comic where Lois Lane turns into a black woman. The woman explains that she’s a huge Superman fan, so she just had to get this comic when she read about it. The comic is priced at $29.95, but the customer asks if she could get it for $20. After some haggling, Mike agrees to sell the comic for $23.

During a podcast, Kevin Smith asks the Secret Stash guys what DC Comics character that they would like to see put into a future Superman movie. Walt chooses Krypto the Superdot, Ming picks Bizarro Superman, and Bryan selects Comet the Super-Horse.

When Kevin asks who is going to play Comet, Bryan says who cares because it’s a horse. Kevin says, “You know comic book fans, dude. You pick the wrong horse, and they get all mad, like with Batfleck.” Byran explains, “It’s like Matt Damon and Ben Affleck in a horse costume.”

Ming starts to go to let all the people waiting outside in, but Walt says nobody gets in until his special guest arrives. Walt’s special guest turns out to be Dean Cain, who played Superman in Lois & Clark: The New Adventures of Superman. After Dean Cain enters the Secret Stash, the attendees are all let inside. Dean Cain says, “To me, it was the greatest start to a career ever. And I loved playing the role. I think it’s fun to be associated with the character. That’s why I’m here now.”

Dean Cain volunteers to answer a couple questions for fans. One fans asks, “Regarding Teri Hatcher, were they real and were they spectacular?” Dean says, “That’s a very good question, sir. I’m going to answer that with one answer. Yes.”

After the questions, Walt presents Dean with a gift. When Dean opens the box, it is a $100 gift certificate to the Secret Stash. Dean does the honors of cutting the Superman 75th birthday cake.

The show ends with a podcast roundtable, and Kevin Smith pointing out it was a great thing for Dean Cain to do to spend time with the fans. Walt adds, “You wear that cape, and you have a standard to uphold. And I’m here to say that Dean Cain is upholding that standard to the tenth degree.”