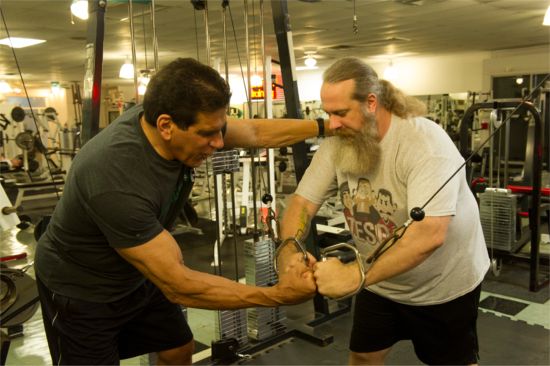 On “The Incredible Bulk” episode of Comic Book Men, a customer came into the Secret Stash to sell a copy of Archie Comics #18. Store manager Walt Flanagan expressed his dismay over all the new fangled stuff in the current Archie comic series, such as the Glee crossover. Walt said, “I’m afraid that maybe they are setting it up for Archie to start placating to today’s youth.” Kevin Smith jokingly responded, “Because what a crime that would be to have Archie be relatable to today’s youth instead of today’s youth being like, ‘Why am I reading about a guy in the 1950’s who hangs out at a malt shop? Do any of these kids have an iPod?’” Walt wound up buying the comic for $100.

After the Archie seller left, Lou Ferrigno showed up at the Secret Stash. Ferrigno told Bryan Johnson that Kevin Smith hired him to help train him to get back in shape. Smith explained, “Lou Ferrigno was at this con. He came over and we were chit-chatting. So he brought up the suggestion of getting in shape, but I didn’t want to do it myself, because what if he was real deal about it? What if he’s a drill sergeant? I wanted to send someone in ahead of me, a guinea pig if you will.”

Bryan showed Lou a picture of himself from six years ago when he weighed much less, and Lou promised to get him back in shape. At the gym, Lou took Bryan through a work-out routine. Lou shared with Bryan that part of his own motivation of getting in shape was that he was picked on as a kid because of his hearing problem.

During a roundtable podcast, Kevin Smith said, “The moment they announced Ben Affleck as Batman, my face had a Joker-like, rictus grin. Oh my god, I know Batman. I put Batman in movies. He’s played a villain in movies for me. If this was happening in the mid-nineties, when I was as thick as thieves with Affleck, I would be the Penguin. I could get Mewes cast as The Riddler, Jay as The Riddler.”

In regards to the online reaction to Affleck’s casting, Smith added, “It was so strange to watch the Internet blow up. I read an article where they said in the first hour on Twitter 71% of the tweets about Ben were negative and 16% were neutral and the rest of the percent were me going, ‘This is awesome! This is going to rock!’”

Back at the Secret Stash, a customer came in the store looking for the first appearance of Elektra in Daredevil #168. The comic was priced at $74.95, but the customer only wanted to pay $60 for it. After some haggling, Walt came down to $68 for the customer.

As part of the fitness training, Lou asked Bryan what he ate for breakfast and lunch and implemented some changes to his diet. Lou brought Bryan back into the Secret Stash after their second workout, and Walt used the opportunity to ask some Incredible Hulk trivia questions. Walt wanted to know if it was a real bear that the Hulk fought in the “Death in the Family” episode, and Lou confirmed that it was indeed a real bear. Lou explained, “It was 700 pounds. It was a baby bear. It was tough.”

As parting advice for Bryan, Lou said, “Good luck, stay motivated, and don’t maybe me angry, because you wouldn’t like me when I’m angry.” However, when Kevin Smith asked Bryan if he was going to continue training now that Lou was gone, Bryan laughed and said, “No.”

Monster Mash: Monster Cereals to Have Ultimate Crossover This Year