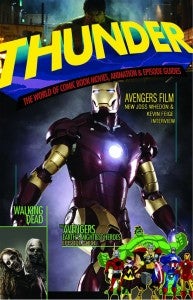 Bluewater Productions has announced a new e-magazine called Thunder!, which will focus on comic book movies and TV shows. Thunder! is being released in time to coordinate with the Avengers DVD release, and the magazine will feature exclusive interviews with Avengers writer/director Joss Whedon and producer Kevin Feige.

According to Bluewater Productions, Thunder! will feature a different extensive episode guide to a television series in each issue. In the first issue, there will be a comprehensive guide to the animated The Avengers: Earth's Mightiest Heroes. In interviews, supervising producer Josh Fine and story editor Chris Yost will discuss all 26 episodes of season one and reveal some clues in regards to season two. In addition, the first issue will also include an episode guide for the Walking Dead television show.

"For me, Thunder! is the culmination of a lifelong passion for comics and film," said Gross. "This is a great opportunity to combine and cover both of them in a way that no one else is doing."

"With the loss of Wizard magazine, we are trying to pick up where they left off. I was a huge fan of their production value and we plan to hit that with this book" said Managing Editor Nikki Borror.

Thunder! is now available digitally for Nook, Kindle, Ipad & My Digital Comics, and Thunder! will be released next week on Comixology, Iverse, Drive Thru and more.