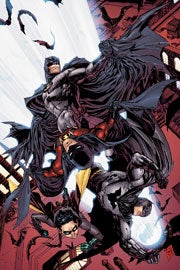 The dog days of summer are still with us, however waning they may be. You know what's NOT waning however? The amount of great comic books on sale, especially this week! Let's take a look at what your favorite comic book companies have in store for you this week, shall we? DC leads us off, as a few of their best-known titles wrap things up this week before the company's relaunch. Batman #713 marks the end of the road for this long-running series, as Dick Grayson ponders his future and past as a member of the Dark Knight's army. Dick's world is changing, and how will he view his time as Batman? Read on in this issue. In other DC news, Superman/Batman #87 sees Batman and Supes getting to the bottom of the mystery of the dead body and trouble in Metropolis, and standing there is none other than the Joker! This showdown wraps up this popular series, so don't miss it. Justice League of America #60 also sees this current team incarnation winding down and the mystery behind Jesse Quick's power fluctuation finally solved. This clears the way for the JLA relaunch set to happen in just two weeks! In the world of DC's big summer event, Flashpoint, there's plenty to read as well. Abin Sur-The Green Lantern, Legion of Doom The Outsider and Wonder Woman and the Furies all see their third issue arrive in stores, wrapping up those mini tie ins as the event finishes its final chapters! Supergirl #67 wraps up this installment of the girl from Krypton's adventures, and let's just say this was not the college experience she signed up for. Last but not least, both Zatanna #16 and Power Girl #27 wrap up the solo series efforts of these two super-powered females as well. 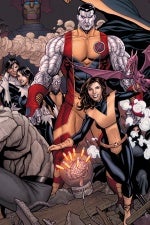 Marvel has some big things in store for you this week, too, and there's a pretty wide range of titles! X-Men: Schism #3 continues the destruction of the unity between the mutants, as the new Hellfire Club continues their sinister deeds, and Wolverine and Cyclops continue to reach an inevitable crossroads. Keep reading the shocking events! Speaking of mutants, Uncanny X-Men #542 sees the team continue to try and keep Juggernaut from attacking San Francisco in this latest Fear Itself tie-in. Over in Thunderbolts #162, they're encountering the same man! Only this time it's ALL the Thunderbolts versus the unstoppable one! A surprise romance begins amidst battle in this week's Avengers #16, and Avengers Academy #18 sees the young students battling it out with the heavy hitters of Fear Itself. Will the students turn to their evil nature, or will they prove themselves worthy of the title "Avengers"? Captain America #2 arrives, and with it more details as to what happened in WWII to make old friends bitter enemies. Also from Marvel this week is Brilliant #1, a new story from Brian Michael Bendis and Mark Bagley! Focusing on a group of super geniuses, they'll try to crack the mystery of superpowers. Start here for this new and exciting title! Image Comics gives you a double dose of The Walking Dead this week with the release of both The Walking Dead #88 and The Walking Dead Weekly #33. Double the undead mania! Also from Image, issue three of two different mini-series. All Nighter #3 will continue to explore a complex emotional and romantic knot between three main characters, while over in Samurai's Blood #3, an exploration of the four levels of suffering in the world continues for Mayuko. Dark Horse will indulge your yearning for good fantasy and science-fiction this week with the release of Conan: Road of Kings #7 alongside the release of Star Wars: Knight Errant-Deluge #1. This series has Sith, Hutt, and of course all the intergalactic action you've come to expect from Dark Horse's line of Star Wars titles. Dynamite brings The Boys: Butcher Baker Candlestickmaker #2 this week, the next issue in a six-issue series. Boom Studios has two big titles hitting shelves this week, with Darkwing Duck #15 taking flight alongside Stan Lee's Soldier Zero #11! There you have it! Now, go out there and get your geek on!