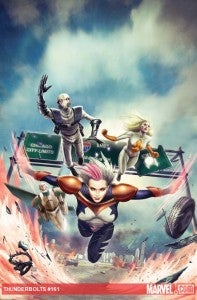 Well faithful readers, it's August! How did that happen? It seems like only two days ago that July was still with us. Wait, it WAS just two days ago!! Oh well, the sweet passage of time continues, and with that I'm back to give you a peek at what's landing in comic book stores this week! Marvel gets things started for us today with some big trouble in San Francisco! Thunderbolts #161 sees both the alpha and beta teams of our hard-luck heroes going up against a possessed Juggernaut. They made some progress in the last issue in bringing down the unstoppable one, but see if this Fear Itself tie-in brings resolution to his rampage. Over in X-Factor #223, Wolfsbane prepares to give birth amid a gauntlet of obstacles, as the "Hard Labor" storyline concludes with this issue. Things also get tough in the pages of Amazing Spider-Man #667, as Spider Island begins with old foe The Jackal returning to lead a force of powered up New Yorkers. See how webhead handles this latest crisis!

A familiar face gets a reboot with the launch of Punisher #1 this week. A new team arrives to take on the adventures and trials of vigilante Frank Castle. Also, the origins of one of the most sinister villains in the Marvel universe continues with Red Skull Incarnate #2. The story of a young man's journey to becoming a force for evil unfolds in this next chapter. If you're looking for more Fear Itself goodness, Avengers Academy #17 and Hulk #38 have got you covered! Last but certainly not least from Marvel is issue two of the Brian Michael Bendis penned Brilliant. The story of cracking the secret of superpowers continues in this next chapter. 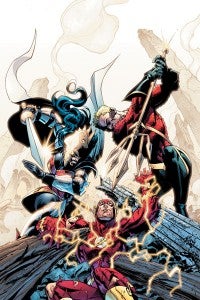 DC has a major title dropping this week, as the next chapter in their big summer blockbuster event arrives with Flashpoint #4. The Flash must find a way to stop the epic war that begins between between the Amazons and Emperor Aquaman. As the DC relaunch gets closer and closer, the events in this new reality for the Flash become increasingly grim! Check out this latest chapter! Over at Secret Six #36, it's a sad farewell, as the title concludes its three year run with this final issue. Nice work, Gail Simone. I salute you for your fantastic work on this series! In Superman #714, Seattle is the latest stop on Supes' "grounded" tour of the country, and Adventure Comics #529 gives us the final showdown for the Legion Academy class, with the end of the Academy at Cosmic King's hand in the balance. For more Flashpoint, Knight of Vengeance, Deathstroke, Secret Seven and World of Flashpoint all wrap with their third issues this week!

Dark Horse launches a new series based on a popular role playing game with Kult #1. Based on a game where humanity must escape from a world where reality and illusion are blended with modern tones of horror and adventure woven into the fabric of the game, the series focuses on one of the only humans who can see through the shroud and to the truth. Get in on the ground floor of this new project! If you need a Star Wars fix this week, be sure to pick up Star Wars: Dark Times-Out of the Wilderness #1. This new story arc sees Darth Vader confront an assassin and takes us back once again to the early days of the empire. Two new tales to get sucked into! Image Comics begins a new six-issue limited series this week with the release of The Infinite #1. Freedom fighter Bowen travels back in time to take on The Infinite, hoping to stop their control of the world. See how his adventure starts! Also, Severed #1 begins a new, terrifying horror series with a young boy and a man with a taste for flesh at the center! Savage Dragon #172 arrives also, and be sure to check out the third installment of 50 Girls 50!

IDW sees two mini series wrap ups this week with the fourth issues of both 30 Days of Night: Night Again and Suicide Girls wrapping things up in their respective works. Also, don't miss Dungeons and Dragons #9! Boom Studios brings legendary figure Elric back with issue two of Elric: The Balance Lost this week, as the warrior prepares to prevent a universe-spanning event from happening. Also from Boom is Irredeemable #28, coupled with the long-awaited Roger Landridge Snarked #0. Dynamite brings back one of its popular titles with The Boys #57, along with a brand new Zorro with Zorro Rides Again #1! One of the most popular characters in fiction makes his return here, courtesy of Dynamite.

Wow, lots to read and it's only the first week of August! You better get to it!