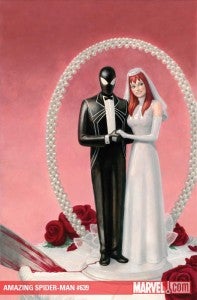 Welcome to August, all you comic book readers out there! We're in the heat of summer, and with school just around the corner, it's time for you to stock up on new comics. You know, before you have to spend your money on lunches, school supplies and the like. Speaking of things you spend a lot of money on, Marvel has a wedding to talk about! What wedding you ask? How about the one that was erased in the events of "One More Day", the marriage of Peter Parker, the Amazing Spider-Man in case you forgot, and Mary Jane! This week's Amazing Spider-Man #639 will attempt to answer all your questions about that marriage, the events of "OMD" and just WHO did save Aunt May? Jump on here for this important story arc! Over in Captain America #608, there's less love and more hatred and destruction, as Baron Zemo continues his war against the new Cap, with a shocking reveal that will have you clamoring for issue 609. The latest Daredevil story picks up, as this week's Shadowland #2 is yours for the purchasing at your local comic book store. Is Kingpin really joining in the fight on the side we think he's on? What will happen next? Jump on board, as this five part series is only going to keep gathering steam!

Ultimate Comics Avengers 2 #6 features a super showdown between Ghost Rider and demonically-boosted Vice-President Blackthorne. Can the Avengers do anything to help? Dr. Doom's bid for domination is on the line this week in Doomwar #6, the final issue of this limited series. After facing down the X-Men, Fantastic Four and two Black Panthers, is Doom truly unstoppable? Avengers: The Origin #5 wraps up the extended origin of Marvel's premier super-team, and be sure to pick up the beginning of what promises to be a fun limited series when The Marvel Universe vs. The Punisher #1 arrives. The heroes and villains of the Marvel U are out for blood, literally, and who else but Frank Castle can handle it?

Over at DC Comics, the focus this week belongs to Brightest Day #7, as we learn if Deadman really is the one to wield the White Lantern. Also, what will Martian Manhunter uncover about a string of murders? The heroes and villains who came back from the dead continue to learn what life has in store for them as DC's event of the summer continues to unfold. A truly interesting story begins in Superman: The Last Family of Krypton #1. This Elseworlds story makes us wonder what if Superman hadn't rocketed off of doomed planet Krypton alone? What if mom and dad tagged along? Find out here as this three-issue tale begins! JSA All-Stars #9 sees the team being torn in half, as gods compete for their minds, taking the team on adventures from the jungle to Los Angeles! Be sure to snag Batman: Odyssey #2, as the twelve-issue maxi series pushes on, as well as Jonah Hex #58, which gives us a tale full of betrayal and greed, two of Jonah's faves! Over in Secret Six #24, it feels like a trip to the old West of the past, so saddle up and join in!

Image Comics brings us a new series this week with the debut of Murderland #1. The story introduces us to a complex world, right in the heart of the streets of Baltimore, Maryland. Featuring reformed killers, wary accomplices, and more characters joining the landscape, the series has potential to give you all the romance, violence, intrigue and human interest you can stand! Get on the ground floor as this series begins. Talk about your mean streets, Nancy in Hell #1 begins a four-part series to see if young Nancy can, indeed, fight her way out of Hell! For Spawn lovers, this week's 400 page Hellspawn Complete Collection in hardcover is a must. Hellspawn #1-16 are included here, with new cover art! Hey, if you're a fan of Baltimore, pick up Murderland AND Dark Horse's Baltimore: The Plague Ships #1. Ok, so technically it's about Lord Henry Baltimore's attempt to wipe out vampires after World War I and not the city, but it still sounds cool, right? The fifty-six page titan that is Magnus, Robot Fighter#1 hits shelves on Wednesday, and fans of the iconic hero should take note, as should all you new readers!

Top Cow is bringing you part three of Artifacts this week, and if you haven't picked it up yet, FIND THE FIRST TWO ISSUES! Get on it, as this series will have major implications for the Top Cow figures such as Darkness and Witchblade. Dynamite has a lot of bang for your buck this week, with both The Boys #45 and The Green Hornet Golden Age Remastered #1 arriving in stores. The overarching Green Hornet stories continue here, as the company continues to mold the classic hero for a new generation. Boom Studios is bringing you Irredeemable #16 this week, and with that comes the aftermath of The Paradigm's battle with The Plutonian. Something big is on the way, and hey, if you're not reading this book, now's the time! For kids of all ages, there's also Boom's Toy Story #5 and The Incredibles #12!