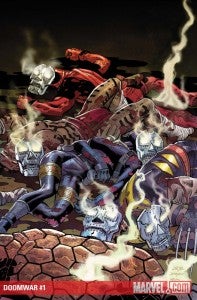 You may be feeling a little post-Valentine's bloat, brought on by candy, rich dinners or other delights. What better way to burn off some of those excess calories by walking, running or sprinting down to your local comic book shop for this week's hot releases??! Marvel kicks things off this week with a couple of biggies! First up is the long-awaited Doomwar #1. His assault on the land of Wakanda fully underway, Dr. Doom kicks things into high gear against TWO Black Panthers, the Fantastic Four, and innumerable X-Men! Can they stop his global threat? The event that's been building in the pages of Black Panther begins here! In another part of the Marvel universe, the battle for Asgard continues in the pages of Dark Avengers #14. The secrets of the Sentry are spilled here, but how will it all affect the battle for the home of the Norse gods? Spider-Woman #6 keeps the compelling adventures of alien hunter Jessica Drew continuing, with a face-to-face confrontation with the Skrulls on order! Loeb and McGuinness bring another incredible story in this week's Hulk #20, as "Fall of the Hulks" continues! As these adventures heat up, another comes to an end. Doctor Voodoo: Avenger of the Supernatural #5 brings to an end the solo series for this latest Sorcerer Supreme. Black Cat joins in the fun in this week's Amazing Spider-Man #621, and Captain America #603 picks up where the controversial last issue left off! Also, look for more Nation X goodness in Uncanny X-Men #521! That not enough to satisfy your comic book tooth? Then check out what DC has in store this week! The action begins in Green Lantern #51, which follows Hal Jordan's dramatic decision to unleash Parallax in order to stop the Black Lantern Spectre. Can he be contained? Another character with a big issue this week is Supergirl, where in the pages of Supergirl #50, the bombshell Kryptonian battles a powerful new foe! Justice League of America #42 continues the adventures of the newest incarnation of the super-team, and in Batman #696, it's a cavalcade of guest stars, with Penguin, Catwoman, Reaper, Robin and of course Black Mask! How will the Dark Knight survive?? Want your heroes a little less angst-ridden? Check out special guest writer Geoff Johns in this month's Tiny Titans #25. Blackest Night: The Flash #3 wraps up another compelling mini-series, with Flash confronting the resurrected Professor Zoom for some much needed answers! Dark Horse starts a frighteningly fresh series this week with the release of Devil #1, a daring new sci-fi take on the booming vampire genre of books. This collaboration brings noted manga artist Torajiro Kishi and anime studio Madhouse together with Dark Horse to publish this new book, which focuses on a virus with super-powered results! For more sci-fi fun from Dark Horse, also check out Star Wars: Knights of the Old Republic #50! Over at Image Comics this week, a noted series begins its final arc. The Astonishing Wolf-Man #21 starts the concluding story for this series, and the Wolf-Man's true origin is revealed! Power and fate are the big powers at work in this week's The Mice Templar: Destiny #7, and be sure to find out what's in store in the pages of Invincible #70 and Elephantmen #24, as that series starts a new arc! IDW brings it with Angel #30 this week, and look for Top Cow to continue its hold on some of the more dark and supernatural titles out there, as the first of two parts of the series The Crazies, adapted from the upcoming George Romero remake, hits stores this week. Mark Waid is back at it this week with the release of Incorruptible #3, and be sure to look for other Boom releases such as Uncle Scrooge #388, Farscape #4 and Cars #1!