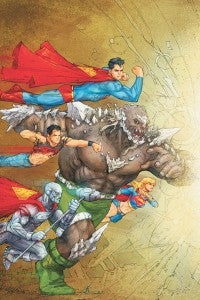 Well faithful readers, another week down, more comics read and more epic adventures on the horizon. It's the circle of life and all that, isn't it? Well, before I keep waxing poetic and all, how about we jump straight into this week's comic book previews? Shall we? Let's! DC gets things underway this week with the big release of Action Comics #903. This issue has some major heavy hitters with Superman, Supergirl, Steel and Superboy all out to stop the events of the "Reign of Doomsday". The DC relaunch is almost here, so don't miss out on seeing how this story wraps up over the next two issues! Detective Comics #880 brings another classic showdown between Batman and The Joker, this time with Jim Gordon along for the ride. See how this next struggle shakes out. The third member of DC's premier trinity is also in action this week with Wonder Woman #613 telling the second part of the staggering "Odyssey" story's finale. Diana faces her biggest threat, herself. See which one comes out on top!

In other DC news this week, Justice Society of America #53 continues the saga of Scythe and his destruction of Monument Point. Now that the hidden door is open, the JSA and the Challengers of the Unknown must discover what exactly Scythe was looking for down there. Need your Flashpoint fix for the week? Fear not! Hal Jordan, Kid Flash Lost, Project Superman and Lois Lane and the Resistance all see their second issues drop this week, so don't miss out on the DC story of the summer! Rounding out DC's big releases for the week is Gotham City Sirens #25, which builds on the stunning action from the last issue, which dealt with secrets and Arkham Asylum. The series is almost over, so find out how it's all going to end! 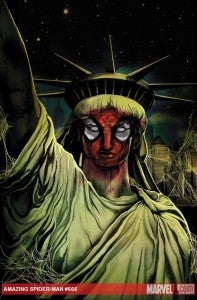 Over at Marvel, they're cranking out some pretty big things as well! While the numbering may sound ominous, I promise you, the action inside of Amazing Spider-Man #666 is pretty...well, ok, it's kinda scary! Be here for the prelude to "Spider-Island", the next big Spidey story. Residents are being turned into spider-powered citizens and let's just say that not everyone is as virtuous as Pete! If the cover alone doesn't sell you, maybe the concept will! Secret Avengers #15 sees the Black Widow attempt to go after the Red Skull herself. This Fear Itself tie-in could be a suicide mission for Natasha, but only reading the story will let you know for sure! Over in San Francisco, X-Men Schism #2 continues where the first part left off, as tensions over mutants in the world continue to escalate and Cyclops and Wolverine square off philosophically, where does that leave the rest of the team? Fear Itself: The Worthy #1 attempts to explain just HOW those who got hammers were chosen and their history, and don't forget to check out Captain America and Bucky #620, yes I said Bucky, as the origin of the Cap and Bucky team is told from the perspective of young Bucky Barnes himself. Also, Incredible Hulks #633 marks the end of Greg Pak's run as writer on the series, and Astonishing X-Men #40 sees the alien race the Brood try to sink themselves, literally, into the mutants!

Image Comics will be blasting readers this week with Bomb Queen: All Girl Special #1. Will she make it in time to kill the Queen of England? Yep, you read that right! Invincible #81 also hits store shelves, alongside The Vault #1 , the first in a new three-part story exploring mystery at the bottom of the ocean! And hey, while you're at it, throw a copy of Skullkickers #9 onto your stack as well! It's a double threat at Dark Horse this week, as they bring out Usagi Yojimbo #139 and The Mysterious Case of Mr. Hyde #4. Boom Studios gets things firing with Incorruptible #20, with Mark Waid bringing you Max Damage's attempts to make himself no longer an enemy in the eyes of the public. Also, Planet of the Apes #4 and Stan Lee's The Traveler #9 are here, too!! IDW releases Doctor Who #7, and don't miss the conclusion to Kill Shakespeare, as the twelfth and final issue of this critically-acclaimed arc comes to a close!

Whew, my fingers are tired! Lots of goodies this week, so make sure you get to the comic store tomorrow!