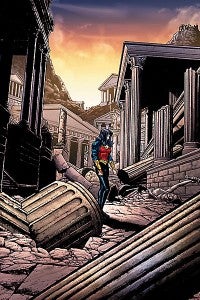 Happy last week of July, comic book fans. Are you beating the heat? Staying cool? Drinking plenty of fluids? Well, you'll need to, because this week's list of new releases is going to be a good one! More fun than sparklers, cold watermelon and kiddie pools! Let's get right to it by seeing what four-color delights the good folks at DC Comics have in store! Wonder Woman #601 leads things off, and coming on the heels of the blockbuster 600th issue, this one sets a new course for Diana as she begins to piece together what happened to the Amazons. Follow J. Michael Straczynski as he scripts the latest adventures of the original princess of power here! Over in Detective Comics #867, everyday Gothamites are getting into the battle of good and evil in the city, under the eye of villain The Imposter. Jump on here for a new four-part arc starring the Dark Knight! Poor Lex Luthor, is he ever satisfied? Action Comics #891 sees Luthor on a new quest for power, one that his brief time as an Orange Lantern has intensified!

Cyborg-Superman returns in the blockbuster issue, Green Lantern Corps #50. What is his latest plan, and just what is Ganthet planning with...Atrocitus??? Part three of the JSA/JLA crossover continues in this month's Justice League of America #47. Jade's back, and with that a whole set of questions that beg to be answered, as the Starheart continues to unleash strange energy across the Earth! The original Captain Boomerang is back in this month's The Flash #4, and over in Green Arrow #2, Oliver Queen attempts to bring order to Star City, as his new residence in the forest of Star City's "ground zero" brings attention from some "unwanted" visitors! We've got a pretty strong pair of sixes here, as Batman: The Widening Gyre concludes its run with issue six, and Justice League: Generation Lost #6 continues to deepen the mystery between newly alive Maxwell Lord and the "reunited'(?) Justice League International. 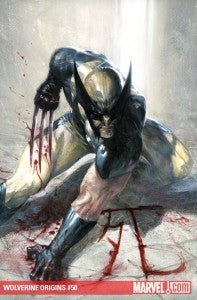 Marvel begins their week with the end of a fascinating story! Wolverine Origins #50 concludes the series' run, and now that Wolverine's quest for revenge is at an end, what's next? Guess you'll just have to read this issue and find out! In more X-Men related news, Uncanny X-Men #526 sets the stage for a major crossover event! With names such as Namor, Sebastian Shaw and Emma Frost involved, you can expect a LOT of heated action, delightful arrogance, mutant history, and all with a girl named Hope now involved as well! Another chapter in the history of the X-Men starts here! It's back to the past, and future, once again in the pages of The Fantastic Four #581, as Nathaniel Richards returns for a two-part trip to Reed's college days. Anita Blake: Circus of the Damned-The Charmer #3 (that's a mouthful!), continues the hunt for a dangerous vampire serial killer, and Anita's life is about to get even more complicated! There's certainly no love lost over in Franken-Castle #19, as the rematch between Daken and Punisher/Franken-Castle is here! Daken may have sliced and diced The Punisher a few months ago, but, he got better! Over in Secret Avengers #3, Steve Rogers' team of operatives deepen their search for a mysterious artifact, all on the red planet of Mars! Last but certainly not least, all you Ultimate universe fans be sure to pick up Ultimate Mystery #1, the next step in the Ultimates new world!

Image Comics brings us some nostalgia in a new form this week with the release of Brigade #2. Yep, the gang's back together, and this time they're facing nothing short of Genocide, the leader of a team of alien invaders. With two members hostage and the return of this group's Birds of Prey, it's an issue you should be sure to check out! Spawn #198 takes us one step closer to the milestone 200th issue, and with a fierce new villain on hand, Spawn's adventures are certainly building! Choker #4 also drops this week, and don't pass up Haunt #8 or Invincible #74, where the Viltrumite War continues to rage! Dark Horse is wowing you this week as well, with Abe Sapien: The Abyssal Plain #2. Another one of Abe's solo adventures is here, with plenty of Cold War intrigue to keep you turning pages! Also new this week is Usagi Yojimbo #130, with the hero going to Hell, well the town anyway, for a confrontation with Boss Higa! Be sure to give Aliens vs. Predator: World War Three #5 if you're a fan of intergalactic, Earthly destruction!

Over at Top Cow, one of their biggest events lands in stores this week. Described as an event five years in the making, Artifacts #1 kicks off a mega thirteen-issue series, that's sure to impact the Top Cow universe for years to come! The major figures in Top Cow, such as Witchblade, the Darkness, Angelus and others are all involved, as the thirteen mystical artifacts of the Top Cow world are front and center. Will their being brought together destroy mankind, or is there something else going on? Jump on here for what's sure to be a stunning event! Dynamite brings us The Green Hornet Strikes #2, as the company's versions of the classic character continue to unfold. Along with that, the story of Green Hornet's sidekick continues in Kato #3! There's tons to be had this week, be sure to get out there and help your local comic book stores beat the heat of bills!