First, let us take a moment to thank all those who have served in our military. We honor your service with Memorial Day this week. Also, HOLY COW IT'S JUNE!! You know what that means for comic books; we're about to hit the thick of it for big summer events, titles and much more! Don't forget too, that this week's new comics will come out on THURSDAY as opposed to Wednesday, due to the holiday! I know it's hard to wait that extra day, but just check out what DC has in store! This week, Brightest Day #3 kicks things off, with a Black Lantern Firestorm in the mix. Huh? "Isn't he alive now" you say? Wait and see! DC's big event, the follow-up to Blackest Night, continues here! Justice Society of America #39 will bring us some closure on this most recent story involving the Fourth Reich. The future doesn't look pretty, unless the JSA can alter it somehow. Over in Gotham City, The Joker's Asylum returns! The weekly feature, which has spotlights on Batman villains narrated by the Joker, returns this month, and first up is the cerebral arch-enemy, The Riddler!

Batman Confidential #45 continues the Dark Knight's adventures with the supernatural, and Judd Winick brings us the adventures of just what exactly happened with Jason Todd after his "death" at the hands of the Joker and his return as the Red Hood. The story begins with the first part of the six-issue Red Hood: Lost Days landing this week. Over in Adventure Comics #12, it's a trip to the past as well, with one of Superboy's earliest adventures explored here! It's time to honor the fallen in JSA All-Stars #7, as the team says good-bye to Damage, a victim of the Black Lanterns. 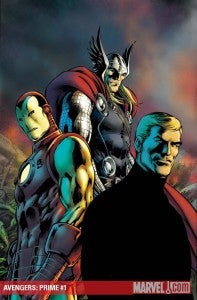 Marvel has more Avengers fun for us this week, all part of the new Heroic Age! This week sees the first issue of Avengers: Prime debut. Focusing on three of the Avengers who have been there from the early days, Captain America, Thor and Iron Man find themselves all working together again. Even though they are, there have to be some feelings of mistrust present, right? Right! And you'll see that here in this premier issue. In the "since you asked for it so nicely" category is this week's debut of Darkstar and the Winter Guard #1. Everyone's beloved Russian team of superheroes returns here, and new adventures are to be had when the Winter Guard faces off against a powerful Atlantean foe in this first issue! Proving that not even Skrulls can keep them apart, Hawkeye & Mockingbird #1 debuts, with the reunited couple off on their own adventures, when they're not running with the Avengers of course! The Thanos Imperative #1 kicks off another cosmic event for Marvel, and Death's favorite worshipper , Thanos, the possible solution to a dimension-spanning problem! X-Campus #1 shows a new X-universe, as told from some of Europe's renowned writers. See their take on the characters this week!

Dark Horse has a treat for Serenity fans this week, as Serenity: Float Out sails into stores, written by Patton Oswalt! Three new stories are present here, with 40 pages of Serenity fun for fans of the series. Conan the Cimmerian #21 brings the story "Kozaki" to a close, and over at Image, there's lots to read there as well! The Mice Templar: Destiny #9 leads things off, with part two of the "Feast of Samhain" story underway. With Invincible #72, one of the biggest arcs in the title's history continues, with Conquest and Invincible squaring off again! Existence 3.0 wraps up with issue four, bringing to close that mini-series. Top Cow has a big book this week, as part of their huge summer event, "Artifacts". Angelus #4 sees Dani has a familiar foe waiting in the wings, even as she begins to accept her destiny as the Angelus more and more. This is a great book to pick up if you plan on following Artifacts as it gets started!

Boom Studios releases another installment of one of their most groundbreaking series with this week's Irredeemable #14. Alongside that comes Codebreakers #3 and 28 Days Later #11. Need something a little more suited for the kids? Boom has you covered there as well with this week's The Muppet Show #6 and Walt Disney's Comics and Stories #707, which has a confidential cover....hmmm.... We'll ponder those conundrums later. For now, thank a vet, and go out there and purchase some comics!!