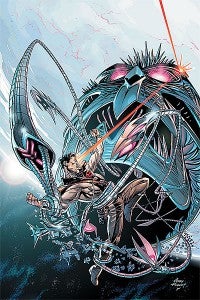 Put down the shamrocks and mugs of green beer! It's a little early to begin the St. Patrick's Day celebrations, so pick up the comic books coming at you at your local comic book store this week! The Superman books continue to ramp up the action, and this week makes no exception. After the conclusion of the World of New Krypton stories, this week's Superman: Last Stand of New Krypton #1 kicks off a three-part miniseries that sees Brainiac attacking the planet, with a determined goal of recapturing the city of Kandor. It's Zod, Supergirl, Superboy and more powered-up aliens all here for your entertainment! DON'T MISS THIS ONE EITHER! Green Lantern Corps #46 helps us wrap up the amazing events of Blackest Night. This one is a must-have issue! Heck, we can't even show you the cover without giving it away, so you gotta run and pick this up! Justice League: The Rise and Fall Special also gives MORE story than you can stand this week, as a follow-up to the conclusion of last week's Cry for Justice. And just what is the big secret that Green Arrow learns? What? You think we're going to tell you here?? Secret Six #19 sees the return of Cheshire, and of course that's big news for Catman! Be here for the start of a new storyline! The bats are in full flight this week too, as Batgirl #8 kicks off a new story arc for the series, and it even has a crossover with this week's Red Robin #10! They used to be Spoiler and Robin, now they're heroes for a new age, but how will all that Ra's al Ghul makes a move on those close to Batman? There's more disturbing events in the Cave, as Batman and Robin #10 moves Damian into direct conflict with new Batman Dick Grayson. Human Target is back with issue two, and don't forget Doom Patrol #8 and The Web #7. 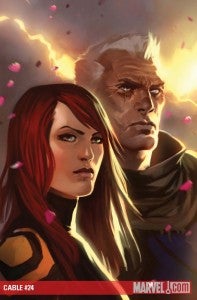 Marvel's giving us a Siege-free week (awwwww), but they're making up for it with some kick-ass X-Men books (yaaaaayyy)! Cable #24 gets things rolling with a battle in the tunnels of New York, as the conclusion to the Homecoming story line concludes in preparation for Second Coming, a mega X-Men event! Dark X-Men #5 also sees a face-off between the Dark X-Men and Nate Grey, X-Man! Who'll win? Will Osborn stay sane? We can't let the mutants have all the fun! The gamma-powered set get in on the fun too with Hulk: Let the Battle Begin #1, which sees Hulk take on the super-powered Wrecking Crew. In Washington DC no less! While we say hello to these issues, we say good-bye to two series. SWORD #5 and the all-ages appropriate Marvel Adventures Super-Heroes #21 both wrap up very different series. New costume, but same old menace in Amazing Spider-Man #624 this week, as the origin of the new Vulture is explored! Guess what else is back this week? It's Powers, and issue three sees Walker's past cause, oh, just a bit of trouble. Not much of course, just a bit (right).

The good folks at Image Comics are giving you a grand opportunity this week to jump on the Elephantmen bandwagon with the release of issue 24, which starts the newest story arc, "Questionable Things". Need more newness? The pick up Jersey Gods #11, which also begins a new story line seeing Zoe with fired up powers! Will Barock go down? It can't be easy sleeping well after running for your life all these years, but that's what we're seeing in the pages of The Walking Dead #71 this week. B.P.R.D.: King of Fear #3 leads the way for Dark Horse this week, with Liz and Abe having a little bit more trouble than they perhaps bargained for while exploring Tibetan caves! And now for a different realm of fantasy, we turn to the upcoming issue of Conan: The Frazetta Cover Series #4. This issue features an interesting cross-section of talent, with Frazetta's "The Destroyer" painting, a Robert E. Howard tale finished by Mike Mignola, Cary Nord and Dave Stewart! Let's not forget Solomon Kane: Death's Black Riders #3 , which will also bow this week! Boom is back this week with The Anchor #6, as one of the toughest guys out there returns to do his work! Also with a big sixth issue is Kill Audio. For the kiddies, it's The Muppet Show #3 and Walt Disney Comics and Stories # 704. Dynamite Entertainment draws on our youth for their releases this week, with Zorro: Matanzas #2 and The Complete Alice in Wonderland #3 leading the way, with ever-popular Red Sonja: Wrath of the Gods #2 and Army of Darkness #26. That's all we've got time for this week! Happy reading!