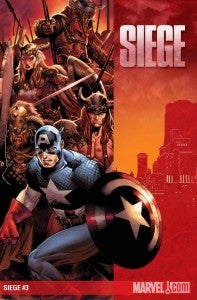 Hey four-color fans! Put down that green beer and take off the shamrock necklaces, because it's time for this week's edition of comic book previews! You'll have plenty of time to celebrate St. Patrick's Day, be you Irish or Irish-friendly later! If you've been impressed by the action surrounding Marvel's event of the year, Siege, then wait until this Wednesday, which sees the highly-anticipated Siege #3. What exactly will happen now that the death of a prominent Avenger has taken place, who's next to fall as the battle wages in Asgard? BE THERE for this issue! If you're going to pick up that issue, then you must also follow it with Dark Avengers #15. They've followed Norman Osborn and his agenda for quite some time now, first as Thunderbolts and now as Avengers, but what exactly are Moonstone (Ms. Marvel) and Bullseye (Hawkeye) hiding, and how does it directly affect Norman? You must read this issue, as the build-up to the next wave of Marvel heroes continues! The action doesn't stop there, as more big issues come, especially when you've got Doctor Doom in the mix! Doomwar #2 arrives this week, and it will take the combined might of the Fantastic Four, both Black Panthers and the X-Men to even try and stop him as his quest for indestructible Vibranium continues, with Storm's life in the balance! Speaking of epic battles, War of the Hulks comes to a close this week in two big issues, the first being Hulk #21, which sees the Intelligencia on the defense against the Red Hulk. Incredible Hulk #608 sees Bruce Banner leading a group of Avengers, yep you read that right, against the Leader and M.O.D.O.K.! Also, it's Rhino vs. Rhino in the pages of Amazing Spider-Man #625, and be sure to pick-up Spider-Woman #7, the concluding issue to the first story arc! A new chapter begins with X-Factor Forever #1 and one ends with Nation X #4! Two big X-titles!

Over at DC, things are equally exciting, and green to boot! Although, everything may not look so cheery for Green Arrow, as Green Arrow #31 begins the "Fall of Green Arrow" story. Coming off the events in Justice League the Rise and Fall Special, Oliver Queen must face the consequences and inner-turmoil over his vengeance against Prometheus, and what will the JLA do with him? The archer's not the only one with problems! Batman #697 sees the Black Mask revealed!! Who is he and can Batman take him down for good? It's a BATTLE over in Supergirl #51, as she takes on Superboy! The "Last Stand of New Krypton" story is officially ON! Titans #23 sheds a spotlight on Red Arrow and his critical condition after Cry for Justice's conclusion, and for something lighter, consider Scooby-Doo #154. We CANNOT leave out Green Lantern Corps #46, which helps bring the battle against Nekron and Blackest Night to a close! Don't forget about Fables #93 or The Authority: The Lost Year #7, from Vertigo and Wildstorm, respectively!

Dark Horse has an interesting pair of releases this week, the first being Groo: Hogs of Horder #4, which finds the kingdom of Horder on the brink of destruction, and not at the hands of Groo, surprisingly enough! He is there though in this concluding issue! Devil #2 continues the intriguing new adventures of a vampire sci-fi series, where a deadly virus and a woman named Mariko bring more questions than answers in this bold new title. Image Comics also has some adventure in store, with a new Dead @ 17 limited series! Dead @ 17: The Witch Queen #1 takes the next step in this series. Nara's acceptance of her consequences begins here as the past leads her directly into her fated future. Choker #2 continues that series' six-issue run with more trouble for Shotgun City! Need more horror in your life? Image has you covered there, too! Fade to Black #1 begins a terryifying new mini-series, with cannibal fun for the whole family! Unless you're the family being eaten, of course! Don't forget this next one either! Dynamite Entertainment rolls out another of its anticipated Green Hornet series with this week's Green Hornet: Year One #1. Matt Wagner wields the pen in this look at the early world of one of America's earliest heroes! There'll be plenty of time to kiss the Irish and pinch non-greenies later! Right now, you need to make plans this Wednesday to be in line for tons of comics!!