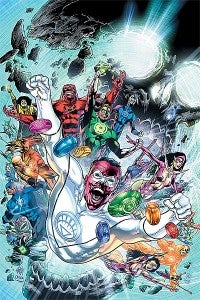 Even though we are one day away from a new month, and, perhaps more importantly, April Fools Day, we must say that there is NO JOKING when it comes to the big comic book selections that are coming your way this Wednesday! DC is bringing one of the BIGGEST issues of the year in this week's Blackest Night #8 , the conclusion to their epic Blackest Night storyline. Just what awaits the heroes as their battle against the dark and the evil of the universe comes to its shattering conclusion, and what will the DC universe look like after the dust settles? You must read this issue! Wonder Woman #42 begins the final run of issues for well-regarded writer Gail Simone, and it promises to take the series back in time for a terrific issue, as one of Wonder Woman's oldest villains returns in this story! Speaking of women with interesting stories, Detective Comics #863 sees Batwoman's pursuit of the psychotic Cutter come to a staggering end! But wait! There's even more from DC this week that you just can't pass up! Can one of DC's landmark teams get any more involved than they have been recently? That's a question you'll have to see answered in the pages of Justice League of America #43, as the "team history" story comes to a close. Remember that whole "Lightening Saga" story from several books and issues ago? Well, now it's paying off in this week's Adventure Comics #9, as the last stand of New Krypton continues! Just what is The Riddler's game anyway? Who knows, but the ladies in Gotham City Sirens #10 will need to find out, and soon! Also, it's Ravager, Holocaust and Static, all in the pages of this week's Teen Titans #81! 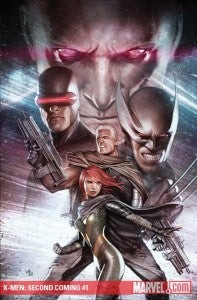 For Marvel's X-Men, it's all been building to this: X-Men: Second Coming #1 debuts this week, and it brings Hope to the mutants, literally. The girl regarded as the savior of the mutant race is brought back to the present, but what will her impact be? Can she save the mutants, or are they doomed anyway? What started in House of M begins its conclusion here! Some other mutants get the limelight as well, with the release of Cloak and Dagger #1, a one-shot highlighting one of the more fan-beloved duos in Marvel. The appearances in the past few years have certainly justified this focus story. Amazing Spider-Man #627 brings a figure that inspires fear into all who meet him, except for the one who took him down! What? But he's the Juggernaut b...uh, uhm, excuse me, family webpage. Juggernaut is here! Universal Inhumans are present and accounted for in Fantastic Four #577, and you won't want to miss the hijinks and mayhem that has become Punisher #15, as Frankencastle begins to grow into his role as protector of the monsters. Yes, you read that right. The New Mutants join the Siege fray this week in New Mutants #11, as Hela calls in the favor owed to her from Dani Moonstar. And let's not forget someone's very important 30th birthday, as this week's She-Hulk: Sensational #1 one-shot celebrates the emerald heroine! 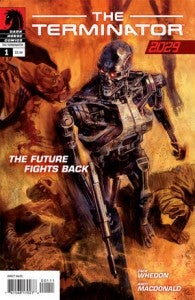 Dark Horse has a triple-threat in store this week, as some of their biggest titles arrive! Usagi Yojimbo #127 will arrive, alongside it comes The Terminator 2029 #1, the first issue that will take us back to where it all began, in the future of course, for the story of John Conner and his role in mankind's war of the future. The adventures of Kyle Reese, the man sent back to save Sarah Conner in that fateful 1984 film, are told here in a three-issue series! Rounding out the trio is Star Wars: Legacy #46, which will bring part four of the "Monster" storyline! Image Comics matches that output this week, with two big trade paperbacks, Godland Vol. 5 and Jersey Gods Vol. 2. Alongside that comes Sword #23, which takes us another step closer to the end of Dara's journey of revenge! Boom Studios leads things off for their company this week with the Mark Waid driven Incorruptible #4, which sees Max Danger continue to try and establish a better name for himself. Can he succeed if some villains are involved? Also from Boom comes Do Androids Dream of Electric Sheep? #10, followed by the kid-friendly Toy Story #3 and Disney's Hero Squad: Ultraheroes #3. Dynamite Entertainment follows up with a big second issue of the Kevin Smith-penned Green Hornet this week. How will the past and the present intersect as one hero retires and another stands possibly in the wings to take over? Big news for Ash fans as well, as the Army of Darkness Omnibus Vol. 1 arrives in stores on Wednesday! So no fooling kids, rush out tomorrow and pick up your weekly dose of bliss! See you back here next week!!