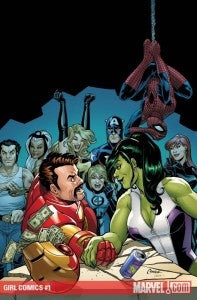 March isn't the only thing that comes in like a lion, especially when you look at what comic books are on their way to your local store shelves this week! One of the biggest this week comes courtesy of Marvel, whose Girl Comics #1 kicks off a terrific new three-issue project, which will bring the mightiest female heroes of the Marvel universe written and illustrated by a powerhouse group of female talent! Stories with Mary Jane, the Invisible Woman, She-Hulk and more are promised as the series takes off here! Speaking of powerful, strong women, Fall of the Hulks: The Savage She-Hulks #1 is yours for the taking! Lyra, the Savage She-Hulk of another, violent world is here again, and what role does the Frightful Four play for her? Be there for the first issue of this mini-series! X-Men: Hope #1 begins the big tale of the potential savior of mutantkind, Hope Summers. With four stories focusing on this red-haired "messiah", you've got a chance to get onboard before the X-Men begin the next step in their evolution! So nice it's being said twice, as Ultimate Comics New Ultimates #1 begins this week! Who's left to join this new group after the events of Ultimatum, and how does Loki play a role? Loki finally begins to play his/her hand in this week's Mighty Avengers #34, and Hank Pym does something NUTS (again)! Spider-Man's gauntlet takes an interesting turn this week, as part of his trial becomes himself! How does Spider-Man balance being Peter Parker, and what about the new Vulture!! Find out more in the pages of Amazing Spider-Man #623. Wolverine Weapon X #11 kicks off a new storyline for those wanting to jump onboard the series, so hitch a ride! 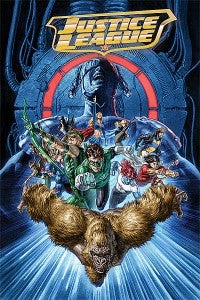 DC Comics is roaring into this first week of March as well, and leading things off is the dramatic conclusion to the seven-issue limited series Justice League: Cry for Justice. While the JLA has introduced the new team already, you still have to be there for the ending to this shocking series! Detective Comics #862 continues the team-up of Batwoman and Batman as they hunt for Gotham's newest psycho. Spinning out of Wonder Woman comes Nemesis: The Imposters #1, the first of a four-issue series focusing on the spy with undeniable skills! Also starting this week is First Wave, a bold new look at the DC pulp universe. Brian Azzarello lends his pen to a world of mortals toughing it out in the dark streets! Batman Confidential #42 ramps it up, as the third issue of the four-issue run of writer/artist Sam Keith is here! Don't forget to pick up JSA All-Stars #4, as the All-Stars find themselves in an unlikely team-up, with the Injustice Society! 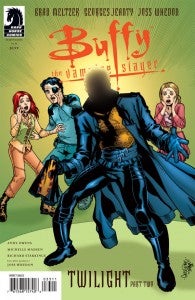 Dark Horse gives us another. tantalizing. issue. of Buffy! This week's arrival of Buffy the Vampire Slayer #33 gets us one step closer to the HIGHLY anticipated reveal of her latest nemesis, Twilight! Who is he! You'll have to wait until issue 34 to find out, but don't pass this one up! Conan the Cimmerian #19 begins a new story arc, and don't forget about DH's intriguing, historically-driven Age of Reptiles #3! Mass Effect: Redemption #3 also joins the ranks on the store shelves this Wednesday! Image Comics is bringing a new twist to their already ground-breaking series Chew with the release of Chew #9 which will introduce, wait for it, vampires! True Story, Swear to God is back with issue 12, and a wedding at Disneyworld is in the works! Jeff Parker's limited series wraps up with Underground #5. Don't forget to pick up God Complex #4 , as everyone's favorite Gorgon, Medusa, causes trouble in a new world and new place! Can she be vanquished for good? Dynamite Entertainment has something big planned for this week, as Kevin Smith's Green Hornet #1 takes flight. Dynamite's Green Hornet blitz is here, with this exciting first issue! Not to be forgotten, The Boys #40 and Zorro #20 come to play too! Top Cow brings us the next exciting issue of Witchblade with the release of issue 136. The end of the current storyline finds Sara Pezzini caught between a rock and a deadly place with Aphrodite IV and Cyberdata on each side! Can the Witchblade pull her through! Boom! Studios has twice the drama this week, with Dingo #4 and Nola #4 hitting shelves, so don't miss the intrigue and mystery brought by these two books! It's a guarantee that we won't see any lambs this week or any other this month, as the comic book publishers you love continue to crank out the fierce action!