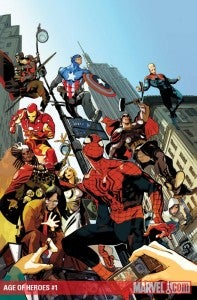 The state of the world got you down? Politics driving you crazy? And you STILL don't have your tax return??? Why not take a moment and check out what your local comic book shop has in store this week in the upcoming releases! Marvel kicks things off, and they're really turning it up, especially since they ended the stunning Siege storyline last week! This week kicks off the new Heroic Age in a big way! Evil is vanquished, the heroes are back on top, and it all kicks off with two big releases this week. Age of Heroes #1 gets things rolling by showing us where the Marvel universe is heading, focusing on characters such as Spider-Man and Doctor Voodoo. Where will they fit into this new world? Don't forget to pick up one of THE most anticipated books of summer when Avengers #1 lands. The classic team has some original members as well as new faces, so be there when Marvel's premiere team takes on a classic foe, Kang the Conqueror, in a brand new adventure!! If you think you'd like a preview and more in-depth Heroic Age coverage, pick up the one-shot Enter the Heroic Age #1.

The X-Men are busy this week too, as Second Coming reaches its eighth chapter in the pages of X-Men Legacy #236. Bastion keeps the pressure on the mutants, and with the Bay Area locked down, he'll attempt to pull of the destruction of the future of mutantkind. X-Factor #205 has a tie-in to Second Coming, and don't think that Bastion has saved all his plans for the X-Men. He's also hunting down X-Factor in this issue too! Girl Comics #2 continues the limited series featuring noted female talent in the comic book industry, and look for Anita Blake: Circus of the Damned Book 1 #1, as her newest adventure finds her bruised, but still up for action! With all the focus on Norman Osborn recently, it's easy to forget about son Harry. Amazing Spider-Man Presents America Son #1 will show us what all this Siege business has done to Harry, and what will his legacy be exactly? 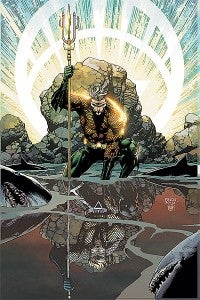 DC continues to shine a bright light in our direction, pointing the way of their future in this week's Brightest Day #2. The mystery behind why characters such as Deadman, Aquaman, Captain Boomerang and more continues to unfold, and who exactly is going to move that white lantern from its landing spot? Batman: Streets of Gotham #12 has another Paul Dini-penned issue that deals with the aftermath of Mr. Zsasz's crimes in the past issues. Also, this week proves you can't keep a good team down, as The Legion of Super Heroes #1 ushers in new stories of those heroes from the 31st century! Expect some ties to other notable DC characters and groups, such as the Green Lantern Corps, in this first issue! It's also a new story in Superman/Batman #72. Writer Paul Levitz brings a tale that brings Lex Luthor, sacrifice and adventures on another world all into one! Zatanna #1 begins the ongoing adventures of everyone's beloved backwards-talking magician! She's not even into her first full issue and she's already got a new villain! Brother Night to be specific! And hey, look, it's Supergirl! What's she doing fighting with Power Girl? And why is all this happening in the pages of Justice League of America #45? Oh, and one more big thing: the ten-issue series DC Universe Legacies kicks off this week, taking a detailed look at the history of the DCU.

Image Comics has quite a fleet of books this week, matching Marvel and DC issue for issue on the action! The Walking Dead #72 kicks things off, as the life the survivors have found doesn't last, with Michonne taking some new moves. Over in Astounding Wolf-Man #23, the build up to the big 25th issue continues, and be sure to check out God Complex #6. This issue sees Sophia's life hanging in the balance; will the gods be there to help? Also in Haunt #7, a new story arc begins, and with a new team! Jump on board if you haven't done so already! And hey, how can you go wrong with a double-sized Jersey Gods #12? Over at Dark Horse, an old friend is back in this week's Emily the Strange: the 13th Hour #3. A thirteenth birthday was never as wild as this one! In a book perhaps a bit more mature, Creepy #3 gives us some Nazi ickiness along with a classic Creepy tale! Battling aliens more your thing? Then purchase Aliens vs. Predator: Three World War #4.

The good folks at Dynamite haven't forgotten you this week, as The Expendables #1 kicks off a big action week, and just in time for the guns blazing movie bearing the same name! Stargate: Vala Dora #1 also gives us a new chapter in the Stargate saga with a focus on a very intriguing character, Vala Dora. Boom Studios brings us another chapter in the expanding Muppet universe with this week's Muppet Snow White #1. You may be surprised as to who's playing who in this series! The Incredibles #9 has the kids' favorite super family return, and in the opposite direction comes The Anchor #8! The brutal action also continues in this week's Incorruptible #6. So forget all your troubles, push aside that bad news, and get yourself down to the comic shop this Wednesday!