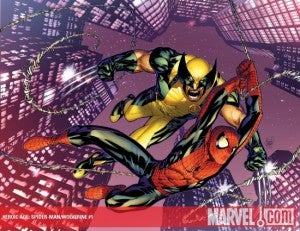 May has arrived, fearless readers, and with it hopefully the warmth and rejuvenation of spring! Flowers are bloomin', birds are hummin', and more importantly, your favorite comic book companies are gearing up for their big summer events! The wheels of that are already in motion, and our look at this week's big releases takes us to Marvel's doorstep. Last week marked the ends of two of their Avengers titles, with both Mighty Avengers and New Avengers ending their storied runs as Siege begins to wind down. This week sees some equally big titles, and Astonishing Spider-Man/Wolverine #1 helps to usher in Marvel's Heroic Age with a super team-up! These two icons join forces in a new series that will take them all over the Marvel U! Speaking of spiders, guess who's back? None other than Spider-Girl with the release of Spider-Girl #1, and the Punisher is with her. MayDay Parker continues her adventures in this new monthly. The X-Men get in on the action too this week, with the next chapter of Second Coming occurring in the pages of Uncanny X-Men #524. An X-Man has fallen, and now the question of whether Hope, the mutant messiah, is worth all of this. Is she? Another title coming back this week is Avengers: The Origin #2, which continues the secret formation of the world's mightiest heroes all those years ago. The Lizard slithers his way into Spider-Man's world this week in the pages of Amazing Spider-Man #630. Can Curt Conners be contained in this comic conundrum? Too many c's? Anyway, that bad joke is a nice way to segue into the humor that is in this week's Deadpool Team-Up #893, which brings Captain Britain into the mix as a cache of weapons is up for grabs! Also, just in time for this weekend's Iron Man 2 release comes Iron Man 2: Public Identity #2. Pick it up on your way to the theater!! 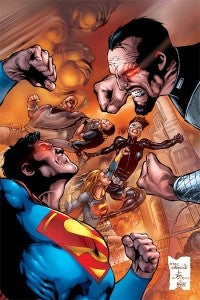 It's all been building up to this over at DC this week. New Krypton, Brainiac, Codename:Patriot, all of culminates with the release of Superman: War of the Supermen #1, the premier issue of this four-issue limited series! It's an out-and-out battle between the supermen of New Krypton and Earth. Zod will stop at nothing to make his destruction of Earth complete, and what will Superman do to stop him? One of the biggest Superman events in years begins here! Things are rumbling over in Gotham City as well, with Batman & Robin #12 kicking things off, and it's nothing short of epic as Robin and Batman find out shocking details in their quest for Bruce Wayne. Red Robin #12 keeps things going too, with Ra's al Ghul taking on Red Robin. Things keep getting crazy for Catman in this week's Secret Six #21, and be sure to check out Jonah Hex #55 with fan favorite artist Vicente Alcazar drawing all the action! The conclusion of the first major JSA All-Stars' arc ends in JSA All-Stars #6, so be there for King Chimera putting it all on the line to save his team and defeat the beasts of the Subtle Realms. Dark Horse continues to keep us on the edge of our seats with Buffy Season 8. This week sees Buffy the Vampire Slayer #35 lead us into the final arc of this bonus season, as Twilight stands revealed, the Slayers are adjusting to big changes in direction, and the gang may never be the same! If you haven't gotten on board yet, this is THE issue to jump onboard! Even Hellboy can't resist the tropical allure of Mexico, and this week's Hellboy in Mexico (Or, a Drunken Blur) shows our supernatural hero starring alongside luchadores, evil turkeys, tequila and more! Just in time for cinco de mayo! Image Comics gives us another return this week with ShadowHawk #1. It's been fifteen years for Paul Johnstone, but now he dawns the Shadow Hawk helmet once again! We can't forget this classic character either, as Spawn #197 enters stores this week! Be sure to pick up Orc Stain #3 while you're grabbing these, as well!! The Boys #42 comes to you this week, courtesy of Dynamite, and with it comes another biggie with Zorro Matanzas #4 . Also hitting shelves is Buck Rogers #11. Boom has the first trade paperback of Incorruptible this week, alongside The Muppet Show #5. Also this week, Walt Disney Comics and Stories #706 gives more wholesome fun! For some wholesome action and adventure, check out Irredeemable #13. Happy Cinco de Mayo guys! Be sure to have a margarita while you're reading this week's comics! Happy reading!!