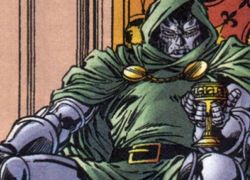 What makes certain villains last longer than others? Why do some seem to fade from existence and others, mercifully or not, hang around long after they seem to have worn out their welcome/relevance? Is there any certain formula that separates the Crazy Quilts and Fiddlers of the world from the Jokers and Green Goblins? And how do you even categorize something like Egg Fu?

Despite all of these questions, there are some answers. Villains who seemed hokey and gimmicky at one point can meet the right writer/artist/editor combo and turn out to be one of the flagship characters of a publishing company. Some perpetuate an act of villainy so amazing that they can't help but vault into the upper reaches of the fictional universe. Listed below are just some of the "lucky losers" who have gone from terrible footnotes in comic book history to major players still today.

When Priscilla Rich first appeared in the pages of Wonder Woman #6 during the Golden Age, she was a petty debutante, jealous over Wonder Woman's beauty and the attention the princess received. Getting a message from her inner 'cheetah', Rich donned a cheetah costume, complete with tail, and became one of Diana's most well known Golden Age foes. Hopelessly and woefully weaker than the Amazon, she always lost easily and soon faded away. There was a brief Cheetah heir, Debbie Domaine, who popped up post-Bronze Age, but who was quickly retconned out of existence and was no better prepared to face Wonder Woman than Rich had been. The modern Cheetah, Dr. Barbara Minerva, is a bloodthirsty, savage incarnation of a powerful, ancient spirit. Sinister, determined and imbued with rage towards Wonder Woman, this villainess is now a major figure in the DC Universe, playing a large role in most of DC's and Wonder Woman's recent story lines. With no fear of penalty or death, finally, this kitty matches the predatory nature of her animal namesake.

Can you go any lower than being turned into a cow on your first outing in the pages of The Fantastic Four? That's just what happened to the Skrulls, that loveable shape-shifting race of aliens who claim that Earth really and truly belongs to them. After that embarrassing encounter, the Skrulls would pop up through out the Silver and Bronze Ages, making more significant strides in their appearance and place in the Marvel Universe, especially with the events of the Kree-Skrull War. The Skrulls were continually defeated, due in large part to their impersonations that sometimes were on par with unmasking a Scooby-Doo ghost. With the events of Secret Invasion though, the Skrulls unleashed their full formidability. No longer confined and limited in their masking abilities, they have single-handedly sewn discord, mistrust and unease amidst the heroes of Marvel and have helped setup the events of Dark Reign. Even though they didn't succeed in their plans for the domination of Earth, they have left a footprint on Marvel's world that will be felt for quite some time.

With one of the nuttiest costumes in the Golden Age, Edward Nigma burst into the Batman world as The Riddler, a puzzle-placing, trap enthusiast with a compulsion for giving hints and clues as to his next crime. He was unseen until late in the Silver Age, where he began to reestablish himself as a bigger part of the DC Universe. The traps became more sinister, the puzzles deadlier, and the obsession and mania began to shape Nigma in to the world-class narcissist he is today. Even his costumes have become more sophisticated! The payoff for Riddler's evolution may have come during the smart and well-crafted Hush storyline. Revealed at the end as the mastermind behind much of the torment and personal questioning Batman had been put through, the Riddler explained his plan and how he knew Batman's identity as Bruce Wayne in a way that showed his true genius. Even Batman had to admit he was surprised at the Riddler's involvement. Nigma's new role as a legitimate private investigator is still a work in progress, but there is no denying his firm foothold in Batman's world, for better or for worse.

Dr. Karla Sofen was originally a bit of the Veruca Salt of the Marvel U. Originally a psychologist who started out in crime as a method of getting all the money she wanted, she eventually joined the Masters of Evil, taking on several jobs in facing various incarnations of the Avengers, always being defeated. She came in contact with several heroes over the years, even battling the Hulk on her own on one occasion, but she eventually ended up in The Vault. Fate would soon turn her way, however, and she joined the Thunderbolts. After adventures with Baron Zemo, she became an integral part of Norman Osborne's Thunbderbolts Initiative. She has since positioned herself as a mastermind of manipulation and intimidation within the team. When she's not playing mind games with the likes of Penance, trying to kill Songbird or orchestrate the various machinations that only she can understand, it's safe to say that Moonstone has established herself as a shadowy, but nonetheless important, part of the villainy in Marvel.

Victor von Doom was but a mere wisp of a tyrannical, egomaniacal monarch when we first met him in the pages of The Fantastic Four # 5. His goals were fairly simple: destroy Reed Richards for, in his mind, ruining his life and then prove himself of superior intellect to everyone else. His traps were simplistic, his obsession with pirate treasure and time travel were clear, but this was just the beginning. Over the years, Doom has battled virtually every hero of note (even Dazzler), stolen the power of the Beyonder, sent the Richards' children to Hell, killed a pretender to his throne and done it all with virtual immunity due to his status as the leader of a country. He's not above using every possible advantage and tool in his store, magical or mechanical, to get what he wants. What makes Doom an even more interesting villain is that he is a man of his word. Whether or not that word is always to the letter is up to him. Doom has become one of the premier villains of Marvel, and the next year looks to be even more productive for him as the is part of the anti-Illuminati in Dark Reign.

Leonard Snart began his crime career as a petty thief with a small visor to protect his eyes from the flashes of gunfire. After going out on his own as a thief, Snart donned a parka, got himself a pretty nifty 'cold gun' and declared himself Captain Cold, the sort of name early Silver Age villains would give themselves. Although he has been a member of Flash's Rogues Gallery for years, his frequent defeats at the hands of all the Flashes and the murder of his sister, the Golden Glider, have all led to the smart, sinister Captain Cold we have today. Now the de facto leader of the 'Rogues', Cold has run a tight ship over the dangerous group of villains. After the death of the latest Flash, Bart Allen, the good captain has led the Rogues on a quest to reestablish their credibility and their purpose, leading the group most recently against a group of upstarts who had been given copies of weapons and costumes of various DC villains. Who would dare make fun of someone in a blue hoodie with this much power?

Comic Book Villains Who Have Gotten Better With Time