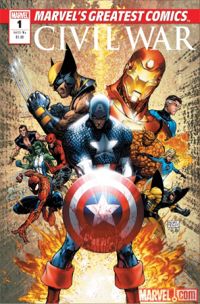 While it seems like comic book prices are always going up, Marvel Comics has announced a little bit of good news. In an effort to make it affordable for new readers to pick up a comic book or two, Marvel Comics has announced the next wave of Marvel’s Greatest Comics imprint. The Marvel’s Greatest Comics imprint spotlights Marvel’s most-acclaimed series with new printings for only $1.00. The following Marvel’s Greatest Comics titles are scheduled to be released in April: Wolverine #66, Hulk #1, New Avengers #1, and Civil War #1. “With the increased mainstream attention on comics and the new readers entering stores, Marvel wants to make sure everyone gets a chance to read our best titles,” said David Gabriel, who is Marvel’s Senior Vice-President of Sales & Circulation. “Marvel’s Greatest Comics allows fans to discover new series at a low price while also providing retailers with product they can stock on their shelves for years.”

Comic Books For Only A Dollar