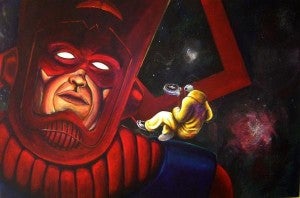 The Charlotte, North Carolina based collection of artists called God City has found success in carving out their own place in the art scene while remaining true to the characters and love of comics that drew many of them together in the first place. Self-described "fanboys at heart," it's safe to say that God City has made its reputation by using their collective talent to depict what they describe as urban, hip hop influenced graphic representations of super heroes and the comic book medium. The artists gathered at the recent Heroes Con, Wolly, John Hairston Jr. and Marcus Kiser, each presented a unique style that complimented the vision of the organization and each other's work. For John Hairston Jr., God City grew out of a collective need for representation in an art scene that, individually, wasn't working for them at the time. "About five years ago, a few of us were looking to pool our talents since back then when we would do shows together we would stick out like a sore thumb since our work is influenced a lot by comic books, graffiti, and hip hop, so we figured we would link up and do our own shows." Hairston went on to say that they have been successful in showing Charlotte a scene that many in the Queen City may not have thought existed until now, a scene that's been compared to what's happening in bigger art cities like those in California and New York. "Toyetique" is a word that Hairston uses to help describe his work to those unfamiliar with these representations. "I use lots of bright colors, I look at action figures, Saturday morning cartoons, all of that to get the feel of my work." More samples of Hairston's work can be seen at his website, allcitystudios.com. Hairston's colleague, the artist known as Wolly, shares some similar influences in his work, "I do a lot of 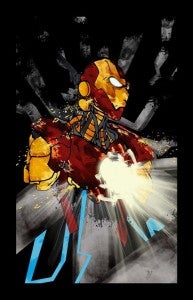 digital illustration, with some forays into painting, and I'm influenced by comic books, of course. A lot is about life in general, some of it's political, depending on what I'm working on, and there's an influence from graffiti art as well." Wolly did express that he had certain favorite super heroes that he enjoys working on, "I really like drawing Spider-Man, because he relates to the everyday person. He's the guy in school trying to get the beautiful girl, he can't pay his rent. I also like Batman, because you have this billionaire cat who has a dark side to him. He decides to go out and fight for certain things and isn't stuck on being rich and not having to care." When going through the process of actually starting a project, Wolly felt that his work really centered around a very formative process, "Sometimes I start with a simple, stick figure sketch just to get the pose in mind and then I go from there with the individual character." To view more of Wolly's interesting and compelling work, check him out at Rebel Star Studios. 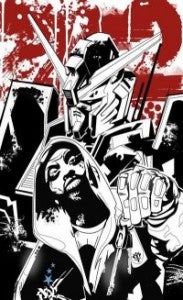 "I'm influenced by digital illustration and graphic design elements, and that plays a lot into how I project my work," said Marcus Kiser, an artist known for his love of drawing Wolverine and the Transformers Megatron and Optimus Prime. He hopes that the hip hop influences and hard lines of his graphic design representations will help people grow to appreciate this style of art in the Charlotte area. Kiser could have been speaking for any of the three men assembled when he said, "I just want people to know that I'm a dope artist and that we're out of Charlotte, where there's not a big art scene, and that I'm here and we're good artists and graphic designers." Visit Marcus Kiser at his studio website, ksrstudios.com! God City's main website states that a sense of unity and self-sufficiency have developed this collective of artists into a force that seeks to challenge viewers and grow respect for their brand of urban and hip hop influenced graphic design and art. As their works keeps gaining in recognition and respect, the chances are that they will be very influential in creating an artistic atmosphere in Charlotte that will broaden many horizons and expose those new to comics to a world of illustration with a wise twist. The images used in this article are courtesy of the artists of God City. Image #1 Galactus vs. Flavor Flav by John Hairston Jr. Image #2 IrOn MAsK by Wolly Image #3 No one in Space got Swagger Like us... by Marcus Kiser